How Krejcir allegedly tried to make another escape attempt 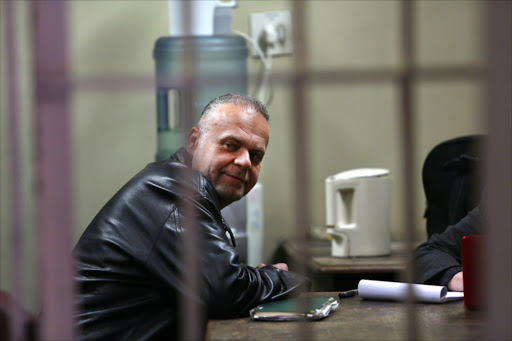 Czech fugitive Radovan Krejcir was hurriedly moved to the country’s most secure prison last month as authorities uncovered yet another audacious escape plot – this one involving “SAPS items” left for him in a court holding cell.

Krejcir – a convicted felon facing a slew of charges in various Gauteng courts – went to the Pietermaritzburg High Court last week to complain about “inhuman” conditions at the super-maximum security eBongweni C-Max prison in Kokstad‚ where he has been housed since June 23.

While this was not the first time he had been locked up at eBongweni‚ Krejcir claimed that the most recent transfer from Pretoria’s Kgosi Mampuru II prison was because of political meddling aimed at preventing him from getting adequate legal counsel and to delay his ongoing cases.

Krejcir was convicted in 2015 of attempted murder‚ kidnapping and dealing in drugs. The matter related to the kidnapping and torture of Bheki Lukhele‚ whose brother‚ Doctor‚ had allegedly disappeared with 25kg of tik.

Krejcir is adamant that he does not belong in Kokstad‚ a prison where “unstable and violent prisoners are sent” – and that there is “no record of any misbehaviour on my part”.

In his affidavit‚ Krejcir complains that being in Kokstad is “unnecessary‚ impractical and simply an unnecessary waste of time”.

“I am not violent. I am not aggressive and my removal to Kokstad is simply an abuse of power‚” he writes.

A Department of Correctional Services official said the move was necessitated by a “security breach”. Details of the breach were not provided to the court “due to the sensitive nature of the investigation”‚ the department’s Sifiso Mabuza said in response to Krejcir’s affidavit.

The Times has established via well-placed sources that the breach was yet another escape attempt.

“He corrupted some officials‚” a source said this week. “He’s always trying something.”

According to the source‚ the attempted escape was to have taken place in June during one of Krejcir’s appearances.

The plan was‚ he said‚ that “some SAPS items” were to have been left in the court cell that Krejcir would have been held in. These items‚ which The Times understands included police-branded clothing‚ would then have been used – with the assistance of bribed officers – to get him to safety.

Asked for comment on the details of the escape attempt‚ Correctional Services spokesman Logan Maistry said: “The matter is the subject of an investigation by the South African Police Service and other relevant law enforcement agencies.”

Police spokesman Brigadier Vishnu Naidoo said that the movement of Krejcir was at the discretion of Correctional Services.

“They incarcerate him at a facility which is appropriate to his threat level as he has been determined to be a dangerous inmate because of a number of escape attempts.

“The police have rights to him because of the pending cases that he faces but ultimately the DCS choose where he is kept.”

Krejcir is currently facing charges relating to the previous escape attempts. He has allegedly tried to escape three times before‚ including a R25-million plot in 2015 that involved his elderly mother and a helicopter.

The Times has also established that Krejcir was moved to Kokstad in December last year as part of the 50-day Operation Vala‚ which tried to preempt potential escapes.

Meanwhile‚ Krejcir has asked the Pietermaritzburg High Court to move him back to Gauteng‚ saying that conditions are horrible‚ he doesn’t have access to his legal representatives and he is more than 700km away from his family.

“It is impossible for me to have access to my daughter‚ Evangeline‚ in Kokstad. The only person who can bring my daughter to see me is Priya Christopher‚ who is the grandmother of Evangeline‚ and because of her medical condition she is unable to travel to Kokstad. As a consequence I am deprived of access and I submit that this is psychological torture‚” he said.

He asked that‚ if he could not be moved‚ to at least be allowed to Skype his family.

“I am fully prepared to pay any costs in this regard‚” he writes.

“[Krejcir] is being housed in line with his security classification‚ to ensure maximum safety and security. The inmate is afforded privileges in accordance with his relevant security classification. The Constitution…as well as various international instruments‚ stipulate compliance with basic human rights in a correctional centre environment. This logically excludes those rights necessarily curtailed through the act of incarceration‚ or those that are removed as a consequence of the individual’s behaviour‚” said Maistry.

The matter has been postponed indefinitely.

- September 2015: Krejcir’s cell is raided. Within it prison officials discover a range of items‚ including a pistol‚ taser‚ pepper spray and cell phones.

- October 2015: Media reports detail an alleged plot by Krejcir to escape while a female police officer was to escort him to a doctor’s appointment. Once in the wind‚ Krejcir was to flee to Swaziland and then to Argentina.

- March 2016: Krejcir is accused of masterminding a plot to bust out of Zonderwater Prison.