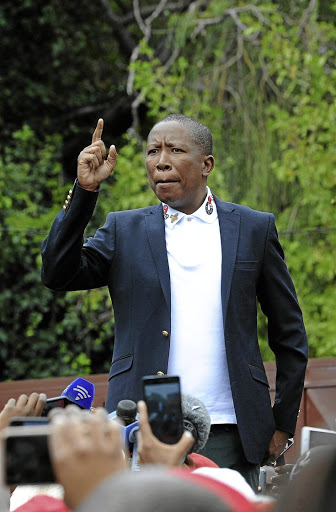 The EFF head honcho was in Newcastle, in the hinterland of KwaZulu-Natal, taking aim at the country's laws, "racist" Indians and, at one point, IFP leader Mangosuthu Buthelezi.

As he stood on a stage outside the Newcastle Magistrate's Court, the defiant Malema doubled down on recent controversies as he addressed a crowd of about 150 people.

He had earlier been in the dock facing charges of contravening the Riotous Assemblies Act over comments that his supporters should invade land - comments that have also landed him in hot water in Bloemfontein, where he is facing similar charges in court.

Malema told the court he was challenging the legislation, taking the matter up in a high court review. The court heard that Malema's legal team had submitted their heads of argument to challenge the act on a constitutional basis, with the matter to be argued in a special motion court on September 20.

Malema used the spectre of his court appearance to reaffirm his controversial comments on land occupation and race. He may have been stoic in the dock, but the recalcitrant leftist came out firing when he addressed his crimson-clad supporters.

"I was here two years ago when I made remarks that we must occupy our land because it's the right thing to do. It's the second anniversary of that speech that landed me in trouble," he said.

"When I said occupy a beautiful piece of land if you see it, I was repeating what is in the Freedom Charter. This act [Riotous Assemblies Act] was used by apartheid. We must know that nothing has changed and things remain the way they are," he added.

He hailed the EFF as political forerunners who were unapologetic in challenging the status quo.

"Tomorrow [today] we are starting with consultations on the expropriation of land without compensation in parliament. It's happening because the EFF said so. Our people will turn out in their numbers and say it's the only option we have," he told the crowd.

He also used the platform to again hit out at racists in the Indian community, saying those who took offence did so because they were racist.

"Indeed, the majority of Indians are racist," he said.

"We did not say all Indians are racist. If you are Indian and you are racist you know we are talking to you, that's why you get angry."

"When it is said by an Indian it is allowed. That is because of racism. Julius Malema comes and says it, and people say it's not allowed.

"We must educate these illiterates who behave like they are educated. Majority means 51% or more. Judge Yacoob said 90%. Effectively he said all of them [Indians] are racist," he added.

He even hit out at Buthelezi.

"He says our statement is racist. Okay. When we said the Gupta's are a problem, Buthelezi said they were investors. He only came later to join us in saying those people are corrupt," he said.