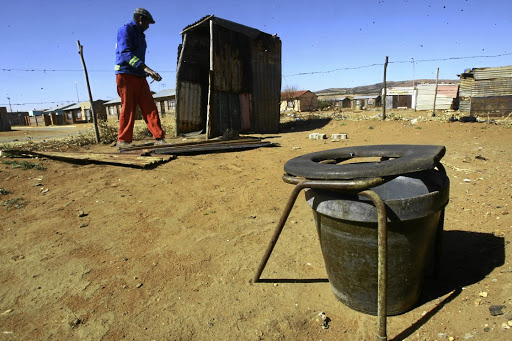 The bulk of bucket toilets are in informal settlements, with 11001 that exist in formal areas.
Image: Sydney Seshibedi

More than 60000 South African households still use the bucket toilet system - 12 years past the initial deadline set by the government to eradicate them.

This is according to Statistics SA's Non-Financial Census of Municipalities 2017 report released this week.

The report lifted the lid on the shameful picture in some of the municipalities.

It showed that almost 930000 households used chemical toilets or urine diversion latrines while 62042 used bucket toilets. In 2016, the number was 68480. This includes formal and informal settlements.

"That's the figure we are working towards and at the moment we are still looking into how long can it take to eradicate those," he said.

Ratau said the bucket system was a part of South Africa's history, especially for the less privileged, and the department wanted to eradicate it as soon as possible. "The department is working towards restoring the dignity of the people by eradicating this bucket toilet system completely."

The system, needing the buckets to be regularly emptied and cleaned, has kicked up a stink for the government as several targets for eradicating bucket toilets over the years have been missed, with the initial one being 2006.

An investigation is underway after a primary school pupil was allegedly made to sit in his own urine.
News
4 years ago

Those in Western Cape and North West reported increases of 11.4% and 4.0% respectively. Other provinces showed decreases in their provision.

The report also indicated that there has been an improvement in the provision of water as that increased by 2.1% between 2016 and 2017.

The highest increase was recorded in Limpopo at 4.3%.

The most populous province, Gauteng, recorded an increase of 3.2%, while the lowest increase was recorded in Eastern Cape at 0.6%, despite it being among the most rural provinces.

When it came to electricity, the highest increase was recorded in Western Cape at 3.7%, followed by Mpumalanga at 3% with Free State recording the lowest increase at 0.7%.

The highest provincial increase for the provision of sewerage and sanitation was recorded in Limpopo at 15.5%, with Mpumalanga recording the second highest at 3.9%.

The lowest provision was recorded in North West at just 1%. The report also showed that SA had 3.5million registered indigent families. About 2.6million (75.4%) benefited from the indigent support system for water, while 2.1million (59.5%) benefited from free basic electricity provided by municipalities.

It revealed that 2.2million (62,6%) indigent households benefited from the support system for sewerage and sanitation, while 2.5million (71.9%) benefited from support for solid waste management.

Black employees at a North West farming equipment manufacturing factory are allowed only a minute in the toilet.
News
4 years ago
Next Article