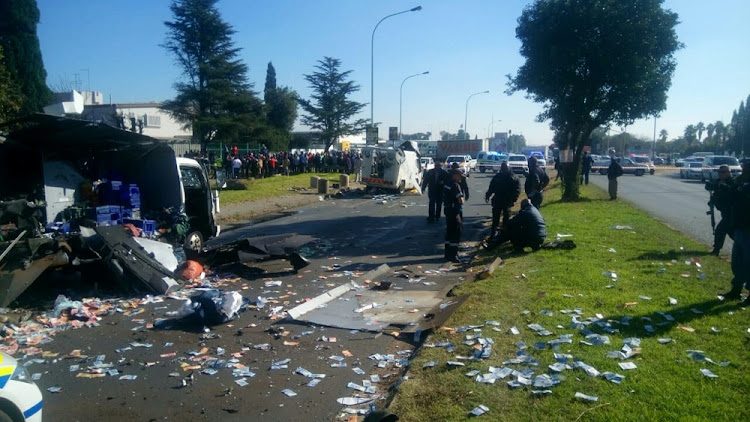 A file photo of the messy crime scene on Atlas road in Boksburg where cash vans were bombed.
Image: SUPPLIED

Have you ever wondered how much money is recovered in botched cash-in-transit heists or when suspects in these heists are arrested?

According to the Gauteng Department of Community Safety‚ R95 million has been recovered in heists carried out across the province in the last nine months.

MEC Sizakele Nkosi-Malobane's office gave a breakdown of the statistics.

- There have only been arrests in 11 cases.

- 26 suspects have been arrested.

- Most of the perpetrators use notable firearms.

- Sixteen vehicles used in the crimes have been recovered from some of the suspects.

Nkosi-Malobane expressed her concern‚ saying criminals "were proving to be sophisticated lately".

"I have instructed the crime intelligence team to work around the clock to ensure that all suspects linked with the cash-in-transit heists are arrested and ensure maximum sentences imposed on them. All law enforcement agencies specialized units must work together to deal with the scourge of cash-in-transit heists‚" she said.

"There is also an urgent need to collaborate with private security in the fight against the syndicates who continue to supply explosives commonly used to bomb cash-in-transit vehicles. I call upon members of the community who might have information on some of these suspects to report them to the authorities."

Another brazen cash-in-transit heist has occurred.
News
4 years ago

Cash-in-transit heists have spiralled out of control, occurring at a staggering average of at least one per day.
News
4 years ago