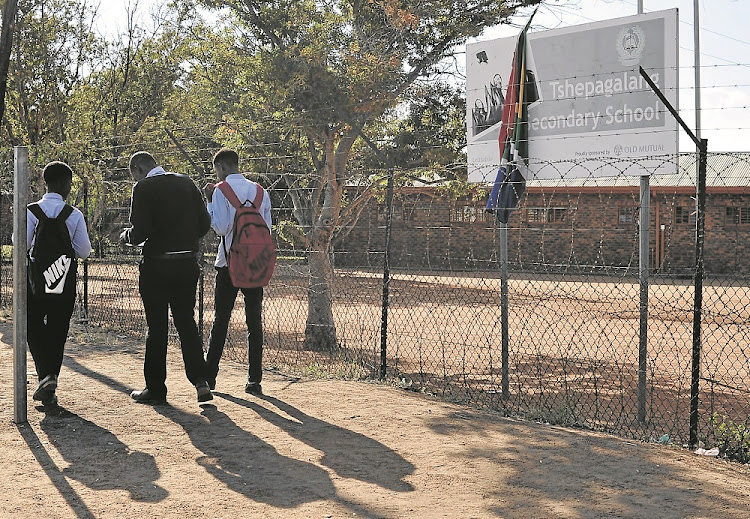 Some of the pupils from Tshepagalang Secondary School who were assaulted by young inmates after accusing them of using drugs at school.
Image: TIRO RAMATLHATSE

Classes at a North West school have been suspended after pupils were attacked and injured by a group of juvenile inmates who accused the learners of being drug addicts.

The incident at Tshepagalang Secondary School in Letlhabile, Brits, on Thursday last week apparently lasted for about five hours.

Police had to use pepper spray to disperse pupils who were retaliating after they were attacked by the 16 inmates from Bosasa security centre.

The centre, which is about 60km away from the school, houses youngsters who are awaiting trial.

Seven pupils were injured and were taken to a local hospital for minor injuries.

The incident has left the parents of the pupils puzzled and fuming over the logic behind sending young crime suspects to their children's school without their knowledge.

The parents have called for the authorities to take appropriate disciplinary measures against the teachers who invited the detainees to the school.

Sowetan gathered yesterday that the juvenile inmates were invited by teachers to motivate the pupils against drug abuse.

The pupils said prisoners locked the gate behind them after entering the school yard, and ordered them to head to the school hall.

The pupils said the inmates were angry because some of the learners were not wearing school uniform.

"They asked us why we were not in our school uniform and also asked us why some of us had dark lips, which they say was the sign that we smoke drugs.

"They started attacking us and some of them were armed with knives," one of the pupils told Sowetan yesterday.

"They told us that they are beating us because we looked like troublesome children. They said they will not tolerate troublesome pupils. Most of these prisoners are of our age."

The pupils claimed the teachers did nothing to protect them from the assault.

"Our teachers instead locked the door of the hall as we tried to escape. The beating lasted for about five hours and some of the learners were injured," explained another pupil.

"The police accused us of provoking the prisoners. They were clearly protecting those criminals and they used pepper spray to disperse us. We were forced to defend ourselves and used the knives to puncture the tyres of the police van. It was a sad day for us, very disappointing that the whole thing happened at the school premises.

"It is also unfortunate that our own teachers did nothing to protect us from those criminals. We are traumatised and want answers from the school management. Whoever invited these criminals should be punished," said the pupil.

Yesterday, pupils were told to go back home and they missed their crucial mid-year exams.

The school management, members of the school governing body, parents and officials from the provincial department of education are expected to discuss the matter on Thursday.

A Grade 9 pupil, John Monakali, said his arm was broken.

"He [a detainee] told me he was beating me for wearing black jeans instead of school grey [trousers]. He kicked me hard and I hit a steel pole," Monakali said.

His angry aunt, Linda Monakali, said: "I took him to school and left him under their [teachers'] protection. They failed my nephew and I want them to pay."

Congress of South African Students president John Macheke said the school must account for the incident.

The spokeswoman for the police, Amanda Funani, denied that police used pepper spray on pupils.

"We are aware that it has an outreach programme. We are investigating what actually happened and whether laws were broken," Siko said.