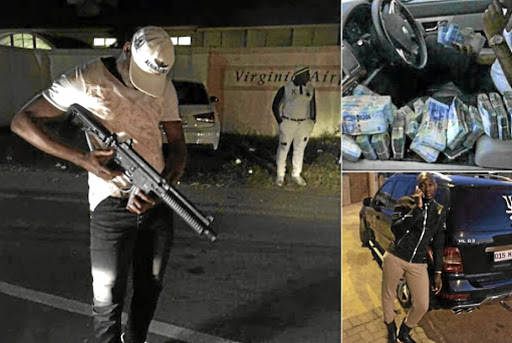 Arrested crime suspect Samuel Maluleka is seen in some of the pictures he posted on Twitter, posing with an assault rifle and bundles of cash.

Maluleka who was moved to a single cell after a threat analysis on his life, apparently has a plasma television set and access to smartphones which he has been using to post messages on social media while in prison.

Sowetan reliably learnt that Maluleka, aka Al Capone, wears designer clothes in prison and that both warders and inmates cheered him whenever he stepped out of his cell.

A police source close to Maluleka's case and his lifestyle, said since his arrest last year, two cell phones had been taken away from him but now he had another.

Net closing in on gang and cops

"First an iPhone was taken from him after [the investigating team] was alerted that he was posting on Facebook. A week later he had a Samsung Note 7 which was also taken away but now he has the latest Nokia," the source close to the investigation said yesterday.

His latest Facebook post while in the cells was last week Saturday, in which he shared a video posted by another user. Earlier in the morning of that same day, he shared a post of his picture on a motorbike he posted in May 2014.

The previous day, on Friday night around 10.30pm, he shared a post of Michael Jackson's picture posted by another user.

The source said Maluleka, 37, did not eat prison food but ordered takeaways delivered to him by prison warders.

A Correctional Services insider confirmed that in prison it was common for some warders to buy takeaway meals for inmates and deliver them for a fee.

Departmental spokesman, Singabakho Nxumalo, confirmed that Maluleka had a TV set. He said Maluleka applied and was granted permission to have a TV in his cell.

Nxumalo however said Maluleka was recently moved to the communal cells after another threat assessment.

Flamboyant Samuel Maluleka‚ aka Al Capone‚ appeared in the Moutse Magistrate’s Court on Friday‚ more than a decade after escaping from the Dennilton ...
News
4 years ago

Nxumalo said no takeaways were allowed in correctional centres, saying there was no proof that Maluleka was ordering takeaways.

Maluleka was arrested in Atteridgeville, Pretoria, after posting pictures and videos of himself with wads of cash on social media.

Police also seized a Z88 pistol and 15 rounds of ammunition during the arrest.

He is currently facing charges of armed robbery, possession of suspected hijacked vehicle and hijacking.

Maluleka's trial is due to resume in the North Gauteng High Court in August.

Yesterday he appeared before the Nebo Magistrate's Court in Groblersdal, Limpopo, on charges of escaping from police custody, armed robbery, possession of unlicensed firearm and suspected stolen vehicle.

The case was postponed to June 13 to set a trial date.