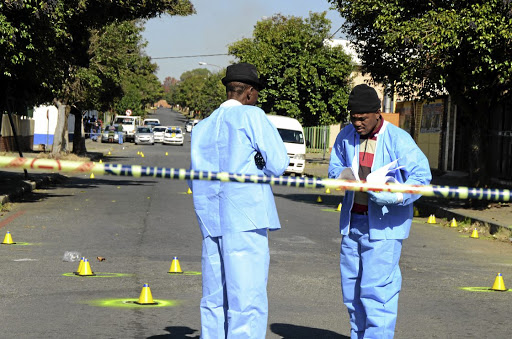 The last time Bongani Sibeko saw his brother was a week ago when he dropped off his laundry at home.

Yesterday, he found him lying in a pool of blood with a foil sheet covering his body.

His brother Banele was one of four taxi drivers from the Greater Brakpan Taxi Association who were gunned down in Ekurhuleni yesterday, allegedly by the association's security guards. At least six other people were rushed to hospital with gunshot wounds.

The brazen shooting was a result of a long-standing internal feud between taxi drivers and the association's bosses.

"Banele was a taxi driver for over five years and loved his job," said Sibeko.

"To see his body lying there is painful."

Sibeko said it was not clear what transpired, but he knew the drivers and executive members of the association were at loggerheads. "The parties were meant to meet this morning [yesterday] but the executives didn't arrive, so Banele and the others decided to go to their bosses, but were shot when they arrived."

Eyewitnesses told Sowetan a large contingent of taxi drivers were ambushed after they arrived at the association's offices.

"The drivers arrived here in a number of taxis, but after five minutes the security guards arrived and opened fire on them without saying a word," said a witness who asked not to be named.

Another witness said the taxi drivers were shot from behind as they attempted to flee a hail of bullets.

"They left their taxis and ran, but they were hunted down. We pulled one of the guys who was shot in the leg to the shop. We kept him awake by speaking with him until the ambulance arrived," the witness said.

The witness said the security guards would have finished him off had they not intervened. Fifty-four spent cartridges were found at the scene, and 10 firearms were recovered.

"We will be sending the guns for ballistic tests to determine whether they were used in illegal activities and if they [security guards] have permits for them," Masondo said.

Attempts to reach the association failed as they were taken in for questioning.