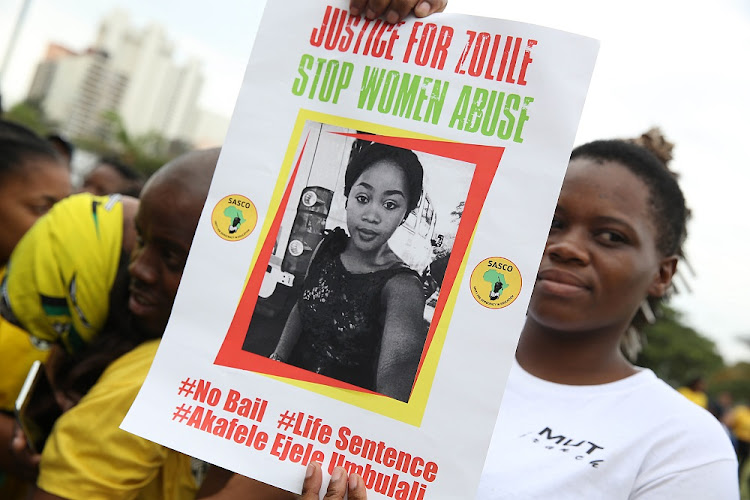 File photo of Mangosuthu University of Technology students at the Durban Magistrate Court, ahead of the appearance of the man suspected of killing Zolile Khumalo.
Image: THULI DLAMINI

Shocking details of how Zolile Khumalo cowered on the floor before she was shot - and was kicked as she lay bleeding - were shared in the Durban Regional Court on Thursday.

Thabani Mzolo‚ 23‚ has been charged with the premeditated murder of Khumalo‚ a student at the Mangosuthu University of Technology, three weeks ago.

Prosecutor Calvin Govender outlined the state’s list of charges against Mzolo ahead of his formal application for bail‚ expected to be heard on June 19.

About 1 000 Mangosuthu University of Technology students and staff lit candles and sang hymns as they recalled fallen student Zolile Khumalo.
News
3 years ago

He also faces charges related to the possession of an illegal gun.

Mzolo is alleged to have signed in at a security post under a false name before forcing his way into Khumalo’s room.

The pair had been in a relationship earlier‚ but had parted ways before their argument.

At his last appearance the court heard that Mzolo had been previously convicted for assault. Deputy Police Minister Bongani Mkongi had earlier said that the investigation into Mzolo would go beyond the slaying of Khumalo.

The slaying of Khumalo‚ a quantity surveying student‚ brought to the fore issues of gender violence and femicide as debate on social media swirled.