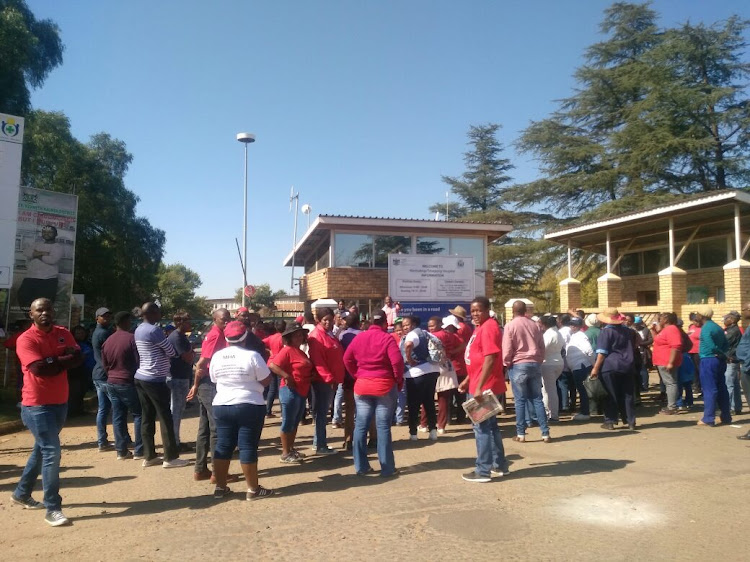 "A thin elderly man trying to collect epilepsy medicine for the second day in a row has been turned away from Tshepong hospital.

"He was extremely distressed. He last collected medicine in March and has none left. We know him well"‚ said dr Alistair Calver.

"He spends three days in hospital waking up from an epileptic fit if he has one."

Calver and prof Ebrahim Variava are being denied access to Tshepong hospital to treat patients.

Calver asked protestors to let the man in to get his medicine but they denied him entry.

A small crowd of Nehawu protestors including hospital staff are denying patients who have come to fetch medicine any access.

Lizzy Ntokwe and her 16-year-old son were also turned away. The frightened skinny teenager was supposed to start TB treatment today. He left without medication.

“I am just praying he will come out of this okay‚” says 77-year-old Rensia Hoffmann.
News
3 years ago

Laboratory staff have left the hospital as Nehawu protestors have gone inside and started intimidating staff who are inside trying to work. The 450-bed hospital is running on a skeleton staff.

When Calver and professor Variava tried to access hospital‚ they were denied entry. Both are specialists in internal medicine.

As they complained about the patients being denied access‚ Nehawu's provincial shop steward told them that if they "had any compassion they would drive patients to nearby Klerksdorp hospital".

Police are watching the protestors‚ who number about 50. They have not removed them. The provincial shop steward‚ who would not give the reporter his name‚ screamed at Veriava "when Nehawu speaks you (must) listen".

They are calling for outsourced cleaners and workers to be hired by the provincial health department. It is not clear when Nehawu will allow Tshepong hospital to reopen.