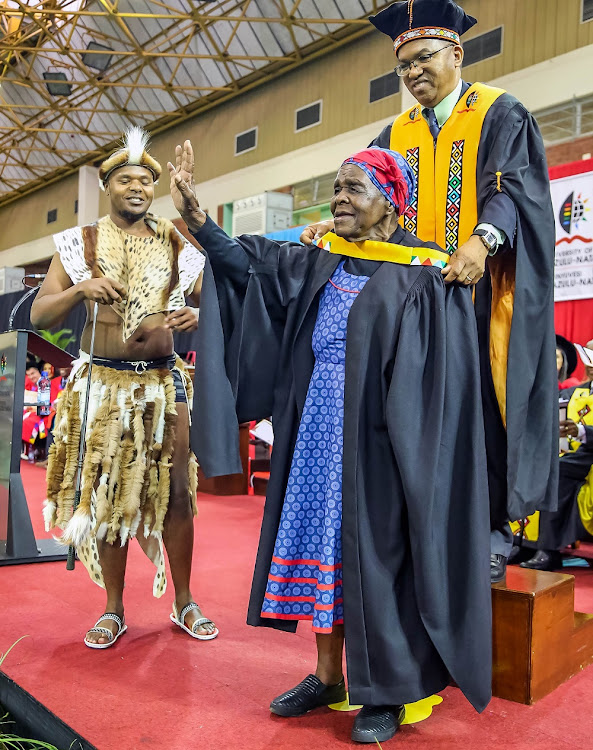 When 89-year-old Nomkikilizo Ntombela accompanied her great-grandson to his graduation ceremony on Friday‚ she did not expect to be capped for his Bachelor of Law degree.

University of KwaZulu-Natal graduate Njabulo Ntombela‚ 27‚ surprised his great-grandmother when he took her up on stage with him‚ draped her in his gown and allowed her to accept his degree.

"I wanted to share this honour with her because my success is her success. She is the reason I was able to get an education‚" he said.

He explained that when his parents died "a long time ago" his gogo made sure that he was taken care of.

"Although she did not have a lot‚ she put me through school on her state pension. She was the main person who made sure that I would succeed despite our poor background."

He said his great-grandmother had been excited to travel from Nkandla to attend the graduation ceremony in Durban but was "stunned" when he took her up on stage.

"But afterwards‚ I told her why I did it. And she smiled and was happy‚" said Ntombela.

He became emotional when he expressed his feelings to her.

"She wasn’t emotional because she has always been stronger than me‚” he said. “That’s how I made it this far."

His family plans to celebrate his achievement with a braai at a relative's home in Durban on Friday evening.

How to graduate in style? Just ask University of KwaZulu-Natal honours graduate Chrysantha Palan‚ who used the stage as her catwalk at her graduation ...
Good Life
3 years ago

South Africa's FitnessBunnie has obtained her housing and town planning degree.
Lifestyle
3 years ago
Next Article