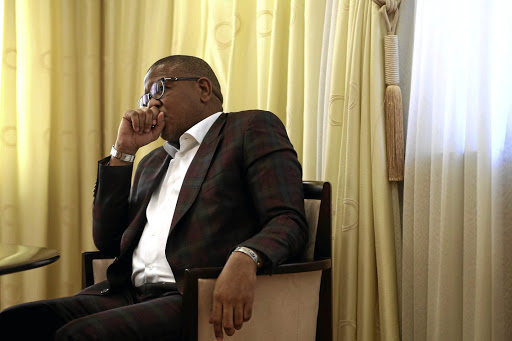 The pain of being reshuffled is still coming for those cabinet ministers who survived President Cyril Ramaphosa's axe on Monday.

This is according to a jovial-looking new ANC head of elections and former police minister Fikile Mbalula during an interview with Sowetan yesterday.

"People are wasting their time with political analysis; this cabinet is temporary, many of the people are still going to go. They must just enjoy for now," said Mbalula.

"It is just a postponement of pain [of being reshuffled later]. At the end [the] president and the ANC are faced with a huge task of reducing cabinet, which is bloated."

Cyril Ramaphosa had a tough job to balance the competing interests of politics and governance when he reshuffled his cabinet.
News
3 years ago

He said he had not expected to "leave" cabinet so soon as he thought he was doing well.

"I never defied the decision by the president to redeploy me. Yes, it affected me psychologically because I thought I was doing well - I mean, within a year we had turned the corner in fighting crime.

"My hair even turned grey, but I have accepted my deployment, it's a big opportunity," said Mbalula.

He said Ramaphosa had an open discussion about his redeployment to Luthuli House as he wanted the ANC to be able to retain its power in next year's elections.

"People always say that they are willing to be deployed by the organisation, but when it happens it becomes a fuss when it comes to other people. It is not our choice where we want to go ... we must abide by what the organisation says."

David Mabuza has been named the new deputy president of South Africa as President Cyril Ramaphosa announced changes to his national executive on ...
News
3 years ago

He said he would soon meet ANC secretary-general Ace Magashule to discuss his resignation from parliament to focus on his new role.

Mbalula revealed that he would also be working with Febe Potgieter-Gqubule as the elections campaign manager. Potgieter was one of the key ANC members who led Nkosazana Dlamini-Zuma's campaign last year for the presidency of the ANC.

"The interpretation that it [his removal] is a smart purge is not what I am party to. I was approached and I accepted. He [Ramaphosa] had a frank and open discussion with me. Of course, at a personal level I had not expected to move drastically out of government, but it is done.

"There is no better person to occupy the position of police [minister] than Bheki Cele."

Mbalula is, however, unsure if his salary would remain the same as that of a minister once he is at Luthuli House.

"I am deployed by the organisation, that is not my headache, it is the TG's [treasurer-general's] headache."

More “bombs” are coming in the state capture investigations. That is what police minister Fikile Mbalula said on Sunday in an interview with the SABC.
News
3 years ago

He believes there were attempts from inside the police to get him removed but doesn't believe this had anything to do with his redeployment.

"I took hard decisions and removed people that were untouchables. That had its comebacks because all sorts of plots were orchestrated and some of the people wanted to ingratiate themselves to the political leadership of the ANC by claiming we wanted to steal money from the state to buy our [party] conference, which was untrue."

Insiders who had intimate knowledge about the cabinet reshuffle said Mbalula's redeployment had not involved him moving to Luthuli House permanently.