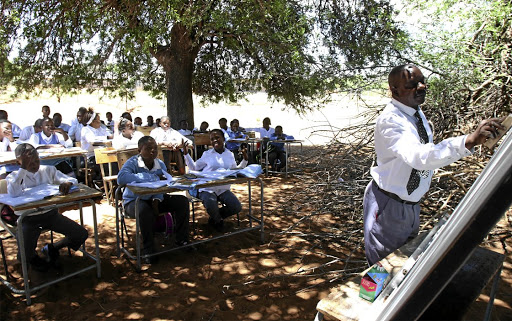 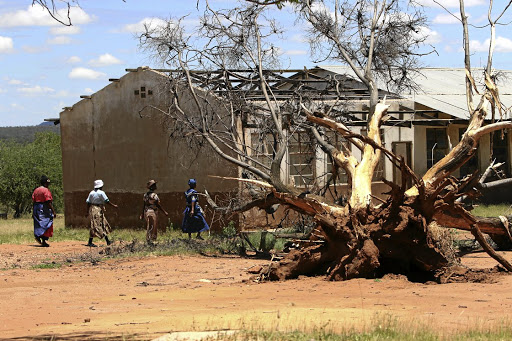 Parents of pupils at a school in Limpopo would rather deal with snakes than allow their children to be taught in a dilapidated building.

This is because the condition of Makangwane Secondary School at Non-Parella village outside Senwabarwana is unsafe.

The roof is leaking, the walls have huge cracks and are on the verge of collapse.

Part of the roof is missing and the classroom floors are cracked. Most of the windows have no glass.

The old school built by the community in 1976 has 105 pupils in grades 8 to 12, with five teachers including the principal.

Since 1989, the community have been pleading with the authorities through letters, asking for a proper structure.

The 36 pupils in grades 8 and 9 "attend" class under one tree. The rest of the grades all have trees, but no teaching equipment.

A teacher, who spoke on condition of anonymity, said they started lessons under the trees on January 30 because parents decided the building was no longer safe.

"Between January 30 and today [Monday], at least three snakes fell from the trees
under which we conduct lessons.

Angry parents are threatening to shut down School over demands that their children are provided with a teacher to take the Afrikaans class.
News
3 years ago

"We are not safe at all," said the teacher. He said, however, that going back into the classrooms was not an option as that was "too risky".

"It is even better to teach under these trees than to be inside the classrooms because we do not know when tragedy will strike," he said.

He added their biggest concern was where matriculants would write supplementary exams in two weeks.

The school produced a paltry 33.3% matric pass rate last year. A concerned parent, Jess Ngoepe, said what worried them was the approach of winter and its elements known for posing health risk to children.

"We appeal to the department to make an urgent intervention before it is too late.

"At least mobile classrooms would do in the interim," Ngoepe said.

School governing body chairwoman Francina Mathekga said they had made contact with the department but did not get any help.

"The department has neglected this school and our children will continue to suffer," she said.

"We know about the conditions of that school and a site has been identified for the building of a proper school in the 2018/19 financial year," said Makondo.