Zuma's future likely to be decided on Sunday 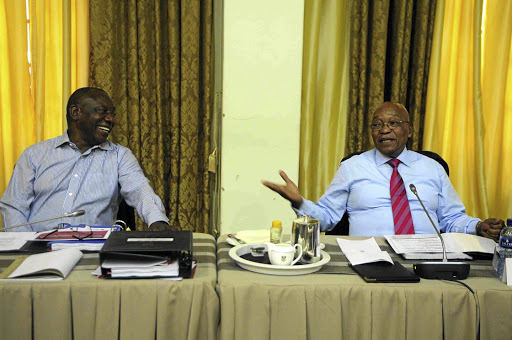 Deputy President Cyril Ramaphosa and President Jacob Zuma during a photo opportunity for the media before the start of the cabinet lekgotla in Pretoria.
Image: THULANI MBELE

ANC president Cyril Ramaphosa and the other top five party leaders are to hold an urgent meeting with President Jacob Zuma on Sunday to tell him to step down, Sowetan learnt last night.

The meeting follows a recent ANCs national working committee (NWC) gathering where it was agreed that Zuma should not be allowed to address the nation at the official opening of parliament on Thursday.

Sources told Sowetan last night the officials will inform Zuma to resign or face parliament where he will be impeached or a motion of no confidence against him. The officials are expected will tell Zuma that they would not defend him when that happen.

Meanwhile, the composition of the ANC interim structures in Free State and KwaZulu-Natal is going to change.

Zuma nonchalant despite talk of his impending exit

Jacob Zuma showed no signs of worry during the cabinet lekgotla.
News
3 years ago

This after the matter was raised at the NWC meeting held at Luthuli House on Monday.

Sowetan understands that NWC members raised their unhappiness that the interim structures in the two provinces announced by ANC secretary-general Ace Magashule were dominated by former provincial leaders who were either in the disbanded provincial executive committees or provincial working committees.

Free State coordinator William Bulwane said the matter was now in the hands of Magashule and the other top six officials.

"They [NWC] discussed it and they referred it to the secretariat and the officials. Magashule must sit down and finalise the matter. We don't have a say."

Bulwane - the former Free State ANC secretary - said their mandate was to prepare for the provincial conference. "The interim structure will table a roadmap to the conference on Monday."

The ANC's national working committee (NWC) has mandated the party's top six officials to tell President Jacob Zuma to resign before the end of the ...
News
3 years ago

Last week, unhappy ANC members in Free State raised concerns publicly that the list was dominated by people aligned to Magashule, who was still the Free State premier.

Yesterday, Sihle Zikalala, the coordinator of KwaZulu-Natal, said Magashule and his deputy Jessie Duarte were charged with responsibilities of establishing interim structures.

It is also understood the new ANC leadership under Ramaphosa was looking at former KZN ANC chairman Senzo Mchunu or Sibongile Besani, former Free State ANC secretary, to be national organiser. Two ANC leaders confirmed that Mchunu and Besani had been discussed and that either of them could be appointed.

Mchunu said he was not aware that he was being touted to take over from Mbalula as national organiser.

Unions have instituted a "Hands Off Jacob Zuma" campaign.
News
3 years ago

President Jacob Zuma acknowledges that there is corruption in Africa but believes its magnitude is often exaggerated.
News
3 years ago

Why all this pressure for Zuma to go? asks campaign

President Jacob Zuma must finish his term and not be removed before 2019.
News
3 years ago
Next Article