Zuma must go before State of the Nation - EFF and DA 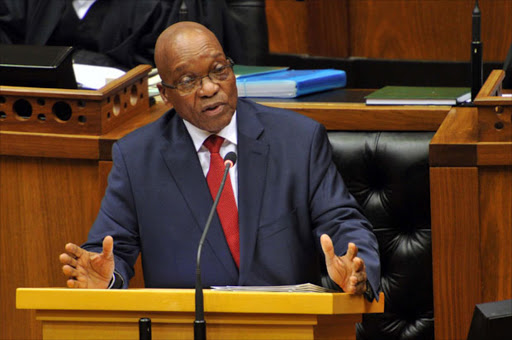 The opposition Economic Freedom Fighters and the Democratic Alliance are attempting to block President Jacob Zuma from delivering next week's state of the nation address (Sona).

"It is no secret that there is a battle within the ANC and the national executive - with each side holding starkly differing policies‚ ideological positions and plans of action. While Cyril Ramaphosa is the ANC president‚ Jacob Zuma remains President of South Africa‚ leaving the country not knowing which direction is being pursued.

"As things stand‚ it would not be in the best interests of South Africa for President Zuma to deliver the State of the Nation Address when there exists great uncertainty as to whether he will remain President‚ and if so‚ for how long."

The ANC's national working committee (NWC) has mandated the party's top six officials to tell President Jacob Zuma to resign before the end of the ...
News
4 years ago

"Last year’s State of the Nation Address cost over R11 million. We cannot afford to waste this amount of public money for Jacob Zuma to deliver the government’s programme of action for the coming year in his Sona‚ when it is not likely that he will remain the President of the Republic much longer.

". . . The Speaker must act in the interests of all South Africans‚ and postpone the State of the Nation Address until the ANC leadership battle has been resolved."

The EFF has also written to Mbete‚ with an implicit threat to disrupt the speech if it goes ahead‚ according to an overnight report in City Press.

The party is quoted as saying: "We write to the Speaker to request that she must start processes of rescheduling the Parliament programme if Mr. Jacob Zuma is still President. Failure to do so will leave us with no option‚ but to take up the issue during SONA."

President Jacob Zuma acknowledges that there is corruption in Africa but believes its magnitude is often exaggerated.
News
4 years ago

President Jacob Zuma has until the end of the day to submit fresh representations to the National Prosecuting Authority on why he should not face ...
News
4 years ago

Ace plays his cards‚ but his support of Zuma could backfire

A bid to rally more support for a fight-back plan to keep President Jacob Zuma in power seems to be in full swing.
News
4 years ago
Next Article