A sad end for those too poor or forgotten by relatives 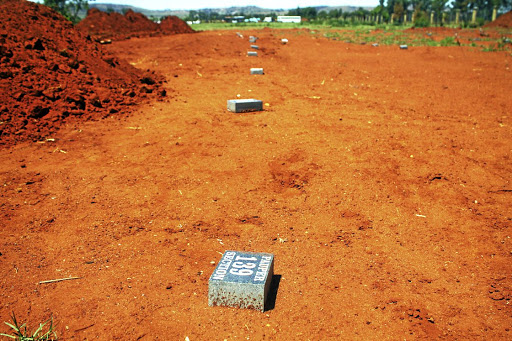 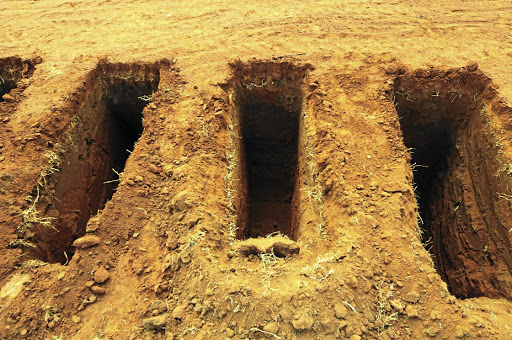 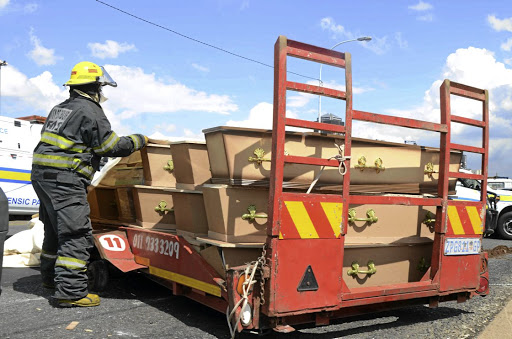 The numbered stone markers spread out on barren ground inside the Olifantsvlei Cemetery near Eldorado Park, south of Johannesburg, point to the lives of people who died unknown.

At least 500 unidentified bodies have been buried at this cemetery since the paupers' section was opened in March.

The bodies of the dead are, according to gravediggers, buried as many as four deep in each grave.

The paupers' section was created for those either too poor to die or whose remains have not been claimed by relatives from hospitals.

Last week 42 such corpses destined for burial at the cemetery brought a busy Johannesburg highway to a standstill after a trailer carrying them lost its wheels.

Gauteng health MEC Gwen Ramokgopa has since stalled the mass burial of the 42 corpses that blocked the M1 highway to give families an opportunity to identify their loved ones.

"Even in instances where we cannot trace the family members of the deceased patients, the law still requires that we bury them in a dignified and respectful manner," said Ramokgopa.

The 12 graves where the 42 were to be placed in a mass burial remained open this weekend, with heaps of sand next to them.

One gravedigger at the site told Sowetan they buried up to 20 stillborn children in one grave because their families "never come back to demand exhumations".

Mourners at such burials are often only council workers and funeral parlour employees.

Hospital corpses were in open trailer

The Gauteng Health Department says it will launch an investigation to establish why bodies of the deceased from a Johannesburg hospital were ...
News
4 years ago

Bafana Sihlali, a manager at KV Funerals in Soweto, has been to many pauper burials in his 20 years of running a funeral parlour.

Sihlali said it took an emotional toll on those tasked with ferrying the unknown dead to their final resting place.

"Its not a simple task to work with paupers because I can't imagine being buried without my family knowing that I am dead or without anyone knowing who I am," Sihlali said.

"We have to pray for them before we lay them to rest. We don't have priests when we perform burials, we pray for them ourselves. It's important to treat human beings with the dignity they deserve."

He described the journey from a government hospital to a cemetery with stacks of coffins as one of the most emotional trips one could take.

"Some of the bodies that we fetch from hospitals have been in mortuaries for close to four months and they are not in a good condition," he said.

"Most of the time we put two corpses in one grave if they have identities. This makes it easier for us to keep a record of them and to exhume them when a family comes forward to claim them."

Man transporting bodies found on on the M1 freeway failed to produce documentation.
News
4 years ago

A gravedigger at Olifantsvlei, who asked not to be named, said the pauper section was no ordinary graveyard.

"This is the only section where people can walk on top of the graves," he said.

At Olifantsvlei five rows of stone markers on a barren field are numbered 1 to 140.

The numbers, according to cemetery officials, are used to keep a record of those buried in the cemetery to help when family members come forward to claim their dead.

"Burial services are very practical," said one gravedigger. "There is nothing special about mass burials because nobody knows them [the corpses] and, in that sense, there isn't any dignity."

A senior official at the cemetery told Sowetan the only dignity accorded to the unknown dead was to conduct burials.

"You must remember that nobody knows them but they are human beings and deserve to be treated as such. The dignity we give them is to bury them because we can't throw bodies way," he said.

City Parks spokeswoman, Jenny Moodley said there were no statistics of pauper burials at Olifanstvlei Cemetery. She said: "An unlimited number of pauper burials have taken place since Olifantsvlei became a designated cemetery."

Ramokgopa says anyone found to have neglected their responsibility in the case of a trailer carrying 42 coffins be held accountable.
News
4 years ago

To date, she added, only four exhumations have been conducted at the cemetery after pauper burials.

Thabo Banda, the chairperson of the Gauteng Funeral Practitioners Associations, said the deceased was classified as a pauper if their bodies remain unclaimed by a family or if a family washes its hands of the responsibility of giving them a dignified burial.

"It becomes practical to bury them after exhausting all the channels of locating a corpse's family," Banda said.

"After about three months the body starts deteriorating and we have to bury it for hygiene purposes. At that point, very little dignity can be associated with a pauper unless the pauper is buried alone - without being part of a mass burial," Banda said.

According to officials mass pauper burials are normally conducted on Wednesdays.