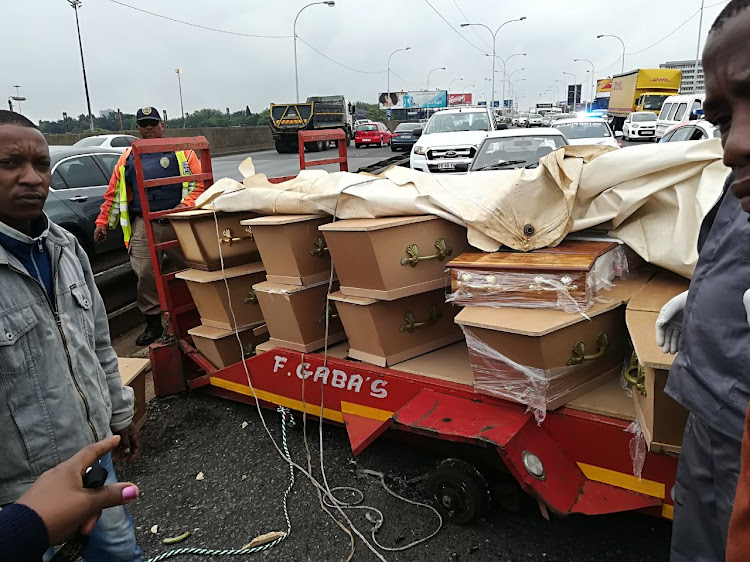 A private undertaker’s vehicle with trailer was carrying 42 bodies from the Charlotte Maxeke Academic Hospital to Olifantsvlei cemetery for pauper’s burials. Image: JMPD

The man transporting bodies found on a broken down trailer on the M1 freeway failed to produce documentation proving he was from a registered mortuary or that he had authority to move the bodies‚ the Johannesburg Metro Police Department said on Wednesday.

The man was transporting the bodies from the Charlotte Maxeke Hospital for pauper burials in Kliptown.

“The JMPD Freeway Unit received a call of a broken down trailer on the M1 South between Smit and Carr onramp‚” said JMPD Chief Superintendant Wayne Minnaar.

“On arrival‚ JMPD Freeway Unit discovered that the trailer’s wheel had dislodged‚ upon further investigation officers were shocked to discover 16 adult and 26 still-born bodies in the trailer‚” Minnaar said.

Upon hearing that the bodies had been taken from Charlotte Maxeke‚ the officers contacted the department of health to verify information given by the driver.

“The driver did not have any documentation proving that they are a registered mortuary nor any hospital documentation to move the bodies. JMPD has requested the owner of the alleged undertaker to produce these documents‚” said Minnaar.

The police were investigating the incident.

The Health Department has since confirmed that the bodies had not been properly transported.

“The department will launch an investigation to establish why the bodies were transported in an open trailer‚” it said in a statement.

Meanwhile‚ Public Safety MMC Michael Sun expressed his shock on how the bodies were being transported.

“The manner in which the bodies are transported is neither dignified nor hygienic at all‚ least to say shows no respect to the deceased and their families. We call upon the Provincial Department of Health to conduct a full investigation and also SAPS to further investigate to ensure there is no foul play‚” Sun said.

The scene was yet to be cleared at 2pm.