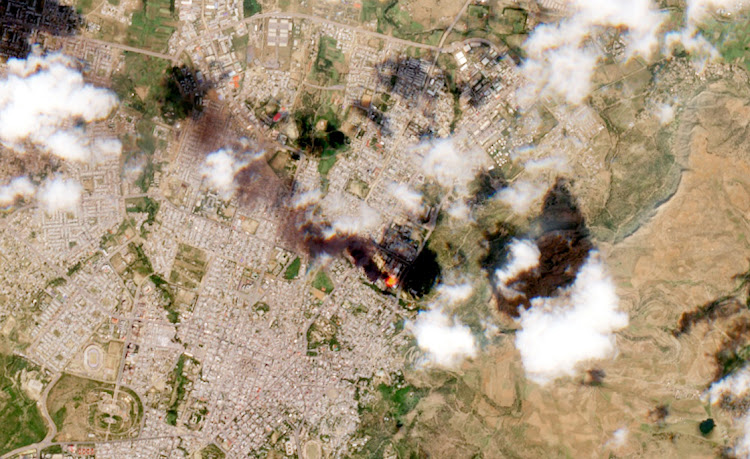 An Ethiopian government air strike on the capital of the northern Tigray region on Friday forced a UN aid flight to abort a landing there, the United Nations said.

Humanitarian sources and the Tigray People's Liberation Front (TPLF), which controls the area, said a university in the regional capital Mekelle was hit by the air strike.

Government spokesman Legesse Tulu said a former military base occupied by TPLF fighters was targeted, and he denied the university was hit.

Reuters was not able to independently confirm either account. TPLF-controlled Tigrai TV reported that 11 civilians were wounded in the air strike. It was at least the fourth day this week that Mekelle had been attacked.

The United Nations suspended all flights to Mekelle after a U.N. plane with 11 passengers had to abort landing on Friday.

The flight from Addis Ababa had been cleared by federal authorities but was told by the Mekelle airport control tower to abort the landing, U.N. spokesman Stephane Dujarric said

"This is the first time that we had a flight turn around, at least to my knowledge, in the recent past in Ethiopia because of air strikes on the ground," senior U.N. aid official Gemma Connell, who heads U.N. humanitarian operations in southern and eastern Africa, told reporters in New York on Friday.

The passengers were aid workers traveling to a region where some 7 million people, including 5 million in Tigray, need humanitarian help, she said.

"To use their own words, they were looking to create a Darfur-like situation," said Selassie. "They, suddenly and overnight, created one million ...
News
3 months ago

'THE WHOLE CITY IS PANICKING'

The two sides have been fighting for almost a year in a conflict that has killed thousands of people and displaced more than two million amid a power struggle between the TPLF and the central government of Prime Minister Abiy Ahmed in Addis Ababa.

The TPLF dominated the Horn of Africa country's ruling party for decades before Abiy, who is not a Tigrayan, took office in 2018.

The government has stepped up air strikes on the Tigray capital as fighting has escalated in Amhara, a neighbouring region where the TPLF has seized territory that the government and allied armed Amhara armed groups are trying to recover.

Residents in Dessie, a city in Amhara, told Reuters people were fleeing, a day after a TPLF spokesperson said its forces were within artillery range of the town.

"The whole city is panicking," a resident said, adding that people who could were leaving. He said he could hear the sound of heavy gunfire on Thursday night and into the morning, and that the bus fare to Addis Ababa, about 385 km (240 miles) to the south, had increased more than six-fold.

There are now more than 500,000 displaced people in the Amhara region, the National Disaster Risk Management Commission told Reuters.

Seid Assefa, a local official working at a coordination centre for displaced people in Dessie, said 250 people had fled there this week from fighting in the Girana area to the north.

"We now have a total of 900 (displaced people) here and we finished our food stocks three days ago."

Leul Mesfin, medical director of Dessie Hospital, told Reuters two girls and an adult had died this week at his facility of wounds from artillery fire in the town of Wuchale, which both the government and the TPLF have described as the scene of heavy fighting over the past week.

A former senior official in an interim government for Ethiopia's Tigray region appeared in court on Saturday over allegations of inciting conflict ...
News
3 months ago

Ethiopia is expelling seven senior UN officials, the Ministry of Foreign Affairs said on Thursday
News
3 months ago
Next Article