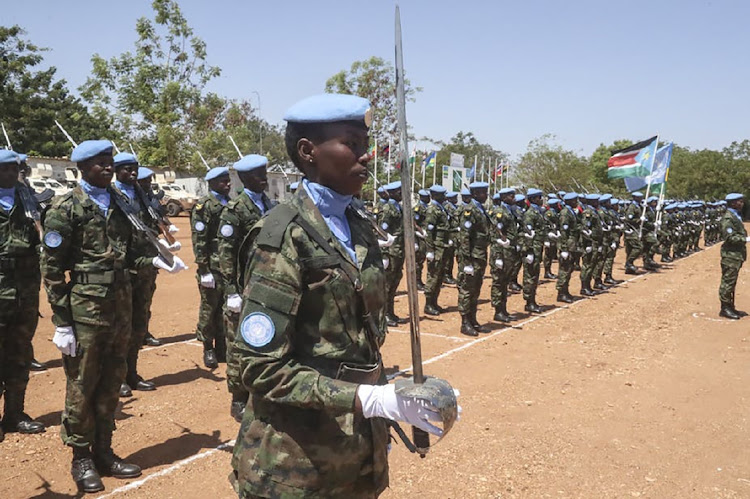 Rwandan soldiers line up to receive their UN peacekeeping medals for their work in Juba, South Sudan in 2019. Soldiers from Rwanda, which is not a member of SADC, would fight alongside Mozambique's forces and SADC troops, the Rwandan government said.
Image: Supplied

Rwanda said on Friday it had started deploying a 1,000-strong force to Mozambique to help the country combat an escalating Islamic State-linked insurgency that threatens its stability.

Last month, the 16-member Southern African Development Community (SADC) approved the deployment of a joint force to help Mozambique respond to the conflict that is concentrated in the northern Cabo Delgado province.

Soldiers from Rwanda, which is not a member of SADC, would fight alongside Mozambique's forces and SADC troops, the Rwandan government said.

Fighting erupted in October 2017 and thousands civilians, soldiers and insurgents have been killed in the violence.

"The Rwandan contingent will support efforts to restore Mozambican state authority by conducting combat and security operations, as well as stabilisation and security-sector reform," the Rwandan government said in a statement.

He said the Rwandan contingent was made up of members of the police force and troops trained "to deal with terrorism and security-related issues in that northern province".

Mozambique's Defence Ministry said would release information on the matter later on Friday.

Almost 800,000 people have been displaced in Cabo Delgado and the fighting has brought a $20 billion natural gas project led by oil giant Total to a halt.

The decision by SADC concluded months of deliberation within the bloc about what was required to stop an insurgency that threatens to open up southern Africa's first jihadist front.

Mozambique's population is mostly Christian, while Cabo Delgado is one of the few provinces with a Muslim majority.

Petrochemical firm Sasol said last month it was selling the stake in the ROMPCO pipeline from Mozambique to SA to a consortium of investors including ...
News
10 months ago

outhern African Development Community (Sadc) heads of state on Wednesday approved the deployment of standby forces to deal with terrorism in ...
News
10 months ago

The government of Mozambique has taken many approaches to end conflict and encourage economic development in the past 50 years. Colonial ...
Opinion
1 year ago
Next Article