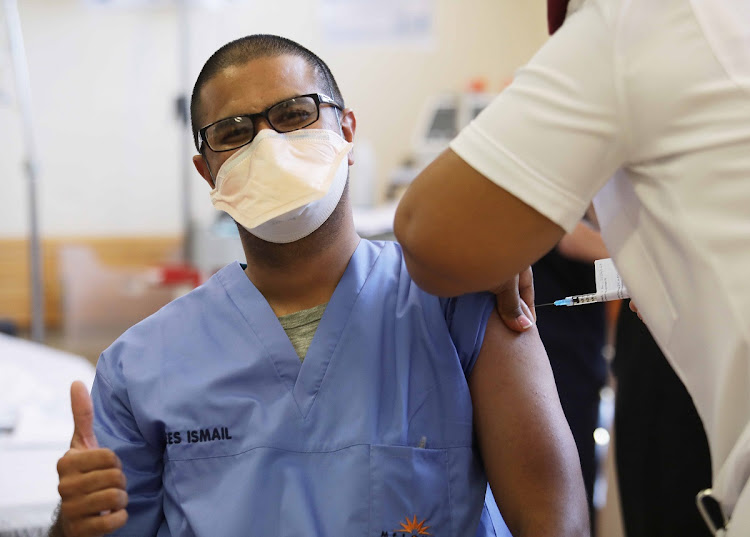 A health worker is vaccinated at Khayelitsha District Hospital in Cape Town. The AU supports calls for drug makers to waive some intellectual property rights on Covid-19 medicines and vaccines to speed up their distribution to poor countries.
Image: SUNDAY TIMES/ESA ALEXANDER

The AU is backing calls for drug makers to waive some intellectual property rights on Covid-19 medicines and vaccines to speed up their rollout to poor countries, the head of its disease control body said on Thursday.

SA and India, which both manufacture drugs and vaccines, made the proposal at the World Trade Organisation (WTO) last year, arguing that intellectual property (IP) rules were hindering the urgent scale-up of vaccine production and provision of medical products to some patients.

They have faced opposition from some developed nations, but the backing of the AU may give renewed impetus for the push to relax IP rules.

John Nkengasong, director of the Africa Centres for Disease Control and Prevention, told a news conference that IP transfer was a “win-win for everybody” that would address the huge inequalities in global public health.

He gave two examples where the developing world had suffered because of restricted access to medicines: the swine flu pandemic in the late 2000s and HIV/Aids in the 1990s.

“In 1996, HIV drugs were available and we saw how mortality in the developed world decreased drastically. But it would take 10 years before those drugs were accessible in Africa in any meaningful way,” he said. “In between, 12 million Africans died, so I just use those numbers to say: any IP transfer will be beneficial to everybody, because nobody wants to sit back and be proud of that sad event ... We want to be on the right side of history.”

He said the developers of Russia's Sputnik V vaccine had submitted a “full dossier” of data to the Africa CDC and that in the coming days an expert panel would review the data and make a pronouncement.

“We have not received dossiers yet from Chinese colleagues, but we remain optimistic that they will submit them to us,” he continued.

The WHO's global vaccine-sharing scheme COVAX delivered its first Covid-19 shots on Wednesday, as the race to get doses to the world's poorest people ...
News
1 year ago

Senegal began its coronavirus vaccination campaign on Tuesday with 200,000 doses that it purchased from China's Sinopharm, which it received last ...
News
1 year ago
Next Article