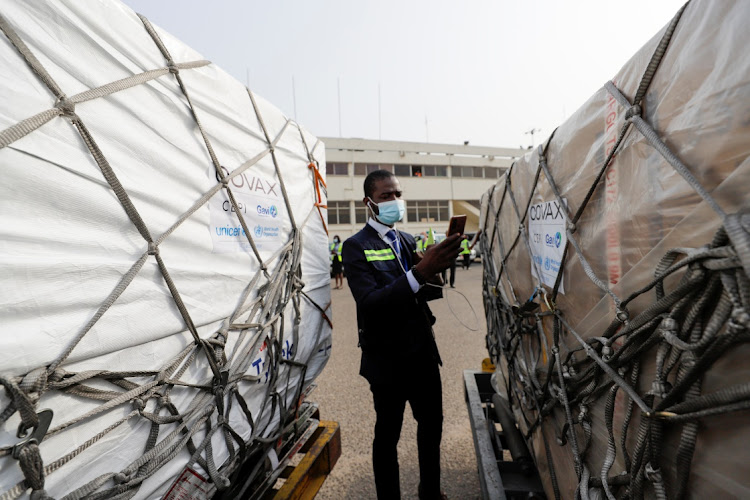 A worker checks boxes of AstraZeneca/Oxford vaccines as Ghana receives its first batch of coronavirus disease vaccines under COVAX scheme, at the international airport of Accra, Ghana on February 24, 2021.
Image: REUTERS/Francis Kokoroko

The World Health Organization's global vaccine-sharing scheme COVAX delivered its first Covid-19 shots on Wednesday, as the race to get doses to the world's poorest people and tame the pandemic accelerates.

Almost a year after the WHO first described the novel coronavirus as a global pandemic, a flight carrying 600,000 doses of the AstraZeneca/Oxford vaccine produced by the Serum Institute of India landed in Ghana's capital Accra.

Local representatives of the WHO and the United Nations children's agency UNICEF described the vaccines' "momentous" arrival as a critical step in bringing the pandemic to an end.

"The only way out of this crisis is to ensure that vaccinations are available for all," Anne-Claire Dufay of UNICEF Ghana and WHO country representative Francis Kasolo said in a joint statement.

The delivery comes eight months after the launch of the COVAX initiative, aimed at pooling funds from wealthier countries and non-profits to develop a vaccine and distribute it equitably around the world.

The shots, part of an initial tranche of deliveries for several low and middle-income countries, will be used by Ghana to start a vaccination drive from March 2 that will prioritise frontline health workers and others at high risk of infection.

"The first segment of the population that will receive the 600,000 doses will be health workers, adults 60 years and over, people with underlying health conditions," the government said on Wednesday after health minister-designate Kwaku Agyeman Manu received the vaccines at the airport.

Some senior government officials, teachers, security personnel and essential workers in Accra and the country's second-largest city Kumasi, will also be vaccinated.

More than 80,700 coronavirus infections have been confirmed in Ghana and 580 people have died, according to a Reuters tally.

Hundreds of South Africans hopped on planes and flew thousands of kilometres in the face of the Covid-19 storm to spend time with their families this ...
News
1 year ago

The roll-out in Ghana is a milestone for COVAX, which is trying to narrow a politically sensitive gap between the millions of people being vaccinated in wealthier countries and the comparatively few who have received shots in less developed parts of the world.

It plans to deliver nearly 2 billion vaccine doses this year, including 1.8 billion to poorer countries at no cost to their governments, and to cover up to 20% of countries' populations. But it will not be sufficient for nations to reach herd immunity and effectively contain the spread of the virus.

The African Union (AU) has been trying to help its 55 member states buy more doses in a push to immunize 60% of the continent's 1.3 billion people over three years. Last week, its vaccine team said 270 million doses of AstraZeneca, Pfizer and Johnson & Johnson vaccines secured for delivery this year had been taken up.

China has donated small batches of its Sinopharm vaccine to countries including Zimbabwe and Equatorial Guinea. And Russia has offered to supply 300 million doses of its Sputnik V vaccine to the AU scheme along with a financing package.

But many countries are largely reliant on COVAX.

On Tuesday, WHO Director-General Tedros Adhanom Ghebreyesus urged wealthy nations to share vaccine doses with COVAX, saying the goal of equitable distribution was "in jeopardy".

"So far 210 million doses of vaccine have been administered globally but half of those are in just two countries," Tedros said in Geneva. "More than 200 countries are yet to administer a single dose."

COVAX is co-led by the WHO, the GAVI vaccines alliance, the Coalition for Epidemic Preparedness Innovations (CEPI) and UNICEF.

It was launched in June 2020 to try to prevent poorer countries being pushed to the back of the queue for Covid-19 vaccines as wealthier nations bought up billions of doses for their populations.

COVAX said this month that it had allocated the first tranche of 330 million doses of vaccines for 145 countries, including several in West Africa.

Africa's reported Covid-19 death toll surpassed 100,000 last week, a fraction of those on other continents but rising fast as a second wave of infections overwhelms hospitals.

SA paused its rollout of AstraZeneca's vaccine after preliminary trial data showed less efficacy against the 501Y.V2 coronavirus variant dominant there, but other African countries have said they will use the shot.

Ghana is among six African countries that have confirmed cases of the variant.

Closeness of Ghanaian election results could strengthen its democracy

Ghana’s general elections last week, the eighth since 1992, ended peacefully and affirmed the country’s credentials as a stable democracy in a West ...
Opinion
1 year ago

Ebola and measles, plus Covid-19, give Africa a pandemic triple-whammy

The coronavirus is only one of three life-threatening viruses against which African countries are fighting, said Dr Matshidiso Moeti, the WHO’s ...
News
1 year ago

Only behaviour change can help us now, say experts

With no proven treatment or vaccine for Covid-19, only a change in our behaviour can flatten the curve, experts in various health-related disciplines ...
News
1 year ago
Next Article