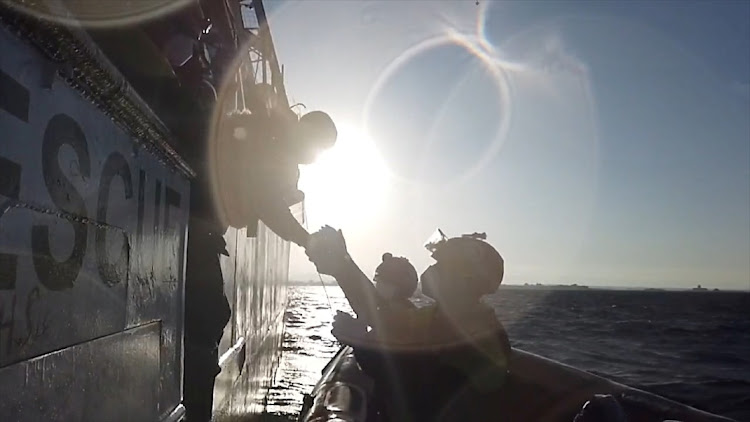 A still image taken from a video shows a rescuer of Spanish NGO Open Arms helping a migrant boarding a dinghy in the Mediterranean Sea, November 14, 2020.
Image: OPEN ARMS

Young people in Senegal held a national day of mourning on Friday for 140 migrants killed in a shipwreck as they headed to Europe last month, sparking debate about unemployment and migration in the West African country.

Friday's unofficial commemoration was spread by users of social media, where young Senegalese criticised authorities over their response to the disaster and for failing to deter migration by creating enough jobs at home.

"As a Senegalese youth, I feel crushed," said Pape Demba, 28, who lives in the capital, Dakar, and organised the day of mourning on Twitter using the hashtag #LeSenegalEnDeuil ("Senegal in mourning").

He has also created a Twitter account, @221Help, to share job announcements and requests for employment, already managing to help a handful of people find work or internships, he said.

"My objective is really to create a movement to take our future into our own hands, because I don't want to count anymore on this government which is incapable of creating jobs," he told the Thomson Reuters Foundation by phone.

Senegal's government spokesman did not immediately respond to a request for comment.

When Hanab Ahmed’s 18-year-old son Mohammed did not come home for lunch or answer his phone, she feared that he — like several other teenagers who ...
News
4 years ago

There has been a significant rise this year in the number of migrants taking rickety boats from West Africa to the Canary Islands, a Spanish territory, in search of better opportunities, the International Organization for Migration (IOM) said.

In September alone, 14 boats carrying 663 migrants left Senegal and about a quarter of them ran into difficulties or were shipwrecked, the IOM said. It has not yet compiled data for October, but said departures and deaths continued to rise.

The NGO AlarmPhone, which supports rescue missions at sea, said it had registered 480 people dead or missing in the last two weeks of October from boats that left Senegal, including those killed in the shipwreck that triggered Friday's day of mourning.

Unemployment stood at 16.9% last year in the nation of 16 million people, where more than half the population is under the age of 20, according to the official statistics agency.

Traditional livelihoods such as farming and fishing are no longer viable for the growing population, and youth flocking to crowded cities have found that jobs are scarce there too.

However, people with work also leave because they want to earn more, often spurred by unrealistic dreams of what awaits them in Europe, the IOM said.

"Misinformation from smugglers leaves many people unaware of the realities and risks of irregular migration," said Bakary Doumbia, the agency's chief of mission in Senegal.

"The government is making many efforts at the moment to prevent such tragedies from happening again. Together, we are working on raising awareness," he said.

The perilous sea passage to the Canary Islands was popular more than a decade ago, but as political dynamics shifted more people started taking the land route through the Sahara desert to the Mediterranean.

Land border closures due to Covid-19 may be one reason people are returning now to the old ocean route, the IOM said.