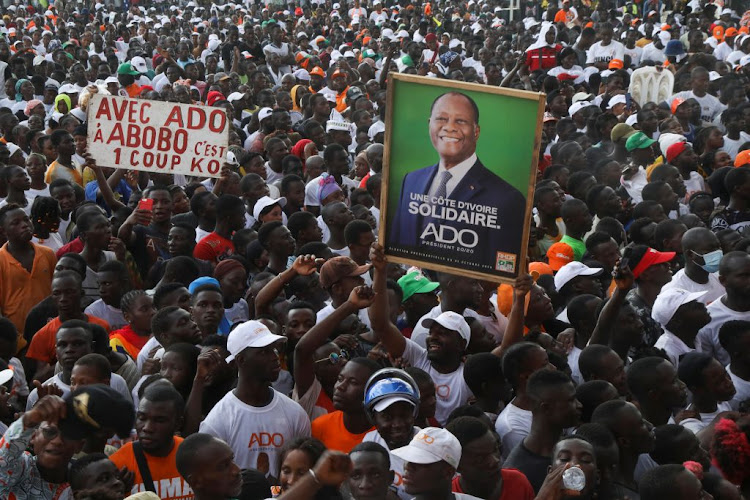 Voting started in Ivory Coast on Saturday as President Alassane Ouattara seeks a third term in an election two rival candidates have urged their supporters to boycott.

The streets of the commercial capital Abidjan were quiet and largely empty in contrast to the sometimes violent run-up to the election, which is seen as a test of stability in Ivory Coast, the world's top cocoa producer and one of Africa's fastest-growing economies.

In the pro-Ouattara neighbourhood of Abobo, a long line of residents waited to cast their vote at a school.

The street clashes have killed 30 people and brought back memories of the 2010 vote that Ouattara won but which unleashed a brief civil war that killed 3,000 people when his predecessor Laurent Gbagbo refused to step down.

The recent violence has pitted the 78-year-old president's supporters against those of his opponents, who say he is breaking the law by running again because the constitution limits presidents to two terms, and is jeopardising the country's hard-earned economic gains.

The world's two largest cocoa producers, Ivory Coast and Ghana, have created a joint body to improve coordination in research, price setting and the ...
News
8 months ago

Mediators from West Africa's regional bloc are due in Mali on Saturday for talks aimed at reversing a coup that has been condemned abroad, but ...
News
8 months ago

Ouattara says he can run again under a new constitution approved in 2016, and is doing so only because his handpicked successor died unexpectedly in July.

Critics say his candidacy is a new blow to West African democracy following a military coup in Mali in August and Guinea President Alpha Conde's successful third-term bid this month.

His two main rivals, former president Henri Konan Bedie and former prime minister Pascal Affi N'Guessan, have called for an election boycott. Affi N'Guessan has told supporters to blockade polling places, but it was not immediately clear if this was happening anywhere.

The likely result is a Ouattara victory though not necessarily a peaceful one. The government has said it has deployed 35,000 soldiers and police officers for election day.

"Ivory Coast has suffered enough," said 46-year-old businessman Abdallah Kourouna - one of just a handful of voters at a polling station in Abidjan's upmarket Cocody district.

"There’s always fear before but fear can’t make a democracy," he said, predicting that any post-election unrest would be short-lived.