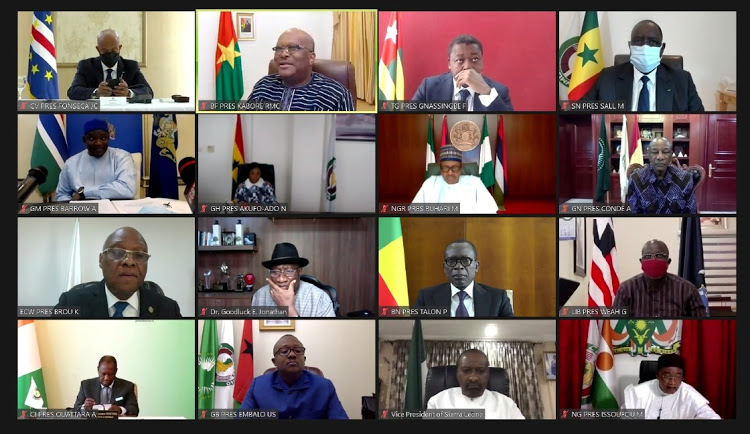 A screenshot of an Economic Community of West African States (ECOWAS) Authority of Heads of State and Government teleconference on the Socio-Political situation in Mali August 20, 2020.
Image: REUTERS/File Photo

Mediators from West Africa's regional bloc are due in Mali on Saturday for talks aimed at reversing a coup that has been condemned abroad, but celebrated by many in a country battling an Islamist insurgency and simmering political unrest.

Leaders from the 15-nation Economic Community of West African States (ECOWAS) have taken a particularly hard line on Tuesday's ouster of President Ibrahim Boubacar Keita. They quickly shut borders and ended financial flows - a move diplomats said was as much about dissuading opponents at home as stabilising Mali.

"They cannot tolerate this taking place. They are taking it very personally. It is on their doorstep and they think they are next," one regional diplomat said of the West African leaders.

The presidents of Ivory Coast and Guinea are among those pushing for a tough response, another diplomat said, as both have faced violent public protests to their third-term bids and want the bloc to show it will not tolerate power grabs in its own backyard.

A bill introduced in parliament this month by a presidential ally caused a storm of criticism from lawmakers when they realised it would legalise ...
News
1 year ago

All eyes are on the visit by an ECOWAS delegation led by Nigeria's former President Goodluck Jonathan, which is expected to arrive in Mali later on Saturday, according to his spokesman.

The ouster of Keita, known as IBK, has been welcomed by many in Mali, which was rocked by months of protests calling for his resignation over alleged corruption and worsening security in areas where affiliates of al Qaeda and Islamic State are active.

"Reinstating IBK is out of the question. The only thing they can achieve is the transition. Under the rules of ECOWAS, ECOWAS should midwife the transition," the second diplomat said, referring to the outcome of the delegation's talks.

A junta of military officers has controlled the country since Tuesday, when the mutineers detained Keita at gunpoint and forced him to resign. They have promised to oversee a transition to elections and a spokesman has said they are open to talks with ECOWAS.

On Friday, thousands of the coup's supporters gathered in a central square in Bamako, the capital, to celebrate the takeover. There is no outward sign ECOWAS's suspension of financial relations is yet being felt.

Niger expands emergency across region where aid workers were killed

Niger's government has extended a state of emergency to the entire region that surrounds the capital Niamey and suspended access to a giraffe reserve ...
News
1 year ago
Next Article