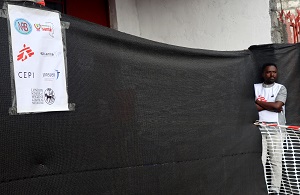 The Ebola outbreak in western Democratic Republic of Congo has infected 100 people as of Friday, killing 43 of them, the World Health Organization said.

The latest outbreak of the virus was declared on June 1 in Mbandaka, a city of 1 million people on the River Congo, just before Congo declared the end of a previous outbreak in the east that had dragged on for two years.

It has spread to remote villages in Equateur province spanning more than 300 km of dense forest with few roads, the WHO said in a statement. The pace of the virus's spread has been relatively consistent, case data shows.

"The virus is spreading across a wide and rugged terrain which requires costly interventions," said Matshidiso Moeti, WHO's Africa regional director.

Suspected Islamist militants killed 13 people during raids on two villages in eastern Congo, the army and a village chief said, the latest in a spate ...
News
7 months ago

As in previous outbreaks, the WHO has implemented a ring vaccination strategy, where contacts of infected individuals are vaccinated, reaching more than 22,600 people to date.

In late June Congo celebrated the end of a genetically distinct Ebola outbreak which killed more than 2,200 people over two years.

Despite effective vaccines and treatments that dramatically boosted survival rates, the response was hampered by having to operate in areas controlled by armed groups.

Last week health responders in Mbandaka went on strike and blocked access to testing laboratories for three days in protest over unpaid salaries and low pay scales. The strike ended on Monday when the government agreed to examine their claims.

Congo's equatorial forests are a natural reservoir for the Ebola virus, which was discovered near the Ebola River in 1976 and causes severe vomiting and diarrhoea.

Health workers responding to an Ebola outbreak in Democratic Republic of Congo ended their three-day strike over unpaid wages on Monday, the World ...
News
7 months ago

Africa should want to be in more, not fewer, vaccine trials: top scientists

Africans should be clamouring to be part of vaccine trials so we have equal access, rather than saying we’re being used as guinea pigs, say top ...
News
9 months ago
Next Article