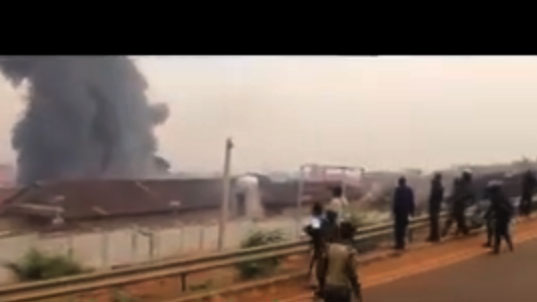 Smoke billowed from the central prison in Sierra Leone's capital and gunfire could be heard from nearby streets on Wednesday after a riot broke out following the confirmation of a coronavirus case there, a Reuters reporter said.

Inmates at Pademba Road Prison had earlier set some buildings on fire in a protest that police and security forces were subsequently able to quell, Information Minister Mohamed Rahman Swaray told reporters.

"There are casualties, but these are early days. When the dust settles we will be able to give you a more comprehensive account," Swaray said in a video streamed online.

The prison was rocked by a series of riots in the 2000s due to overcrowding and poor conditions. Its numbers have risen in recent days with the transfer of inmates from a reintegration centre back to the prison due to the coronavirus pandemic.

The West African nation has so far confirmed 104 cases of the virus and five deaths. On Monday, the Chief Justice said an inmate at Pademba prison had tested positive for the disease and been transferred out of the facility for treatment.

Asked if the riot was linked to the epidemic, Swaray said it was too early to comment on the causes for the unrest, adding that the situation was under control.

The correctional centre, designed to hold 324 inmates, held over 2,000 in 2019, according to a U.S. State Department human rights report that described conditions in Sierra Leone's prison system as harsh and life-threatening.