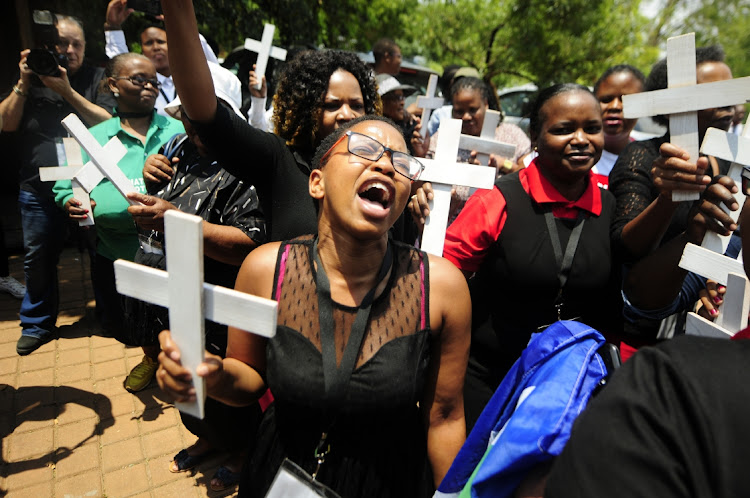 SOfredEsidimeni0503 Families of patients who died in the Life Esidimeni tragedy outside the venue where arbitration hearings took place in 2018. File photo.
Image: Thulani Mbele

The former Gauteng deputy director-general for mental health services has said the processes were rushed in moving Life Esidimeni patients.

After several procedural delays and adjournments, the inquest meant to determine if anyone was criminally liable for the deaths of 144 mental health patients in the 2016 disaster continued virtually on Monday.

The former deputy DG, Hannah Jacobus, admitted to the commission of inquiry to writing false licences for NGOs, including ones where patients died. She said she was under pressure from then head of Gauteng mental health services, Dr Makgoba Manamela.

Jacobus’ role was to oversee clinics in the Ekurhuleni and Sedibeng districts, and to create a framework for the downscaling of patients at Life Esidimeni.

“There was no indication of Life Esidimeni closing at the time; we were looking at the downscaling to make the facility more suitable and profitable.

“After completion of the document we each went to do surveys in the districts. I was looking at what type of NGO was suitable.

“The downscaling was only on paper. When we were working on the document, the finalisation was never implemented,” Jacobus testified.

NGOs were used to care for patients after the Gauteng health department terminated the contract with Life Esidimeni. In total, about 1‚712 patients were moved out of Life Esidimeni homes.

Despite being told she was a “defensive” witness‚ Manamela admitted to Solidarity advocate Dirk Groenewald that the NGOs to which she gave authority did not comply with the legal requirements.

The Alternative Dispute Resolution overseen by former deputy chief justice Dikgang Moseneke in 2017 found that patients were transferred to NGOs that had been issued “unlawful and knowingly fraudulent” licences.

It was found further that many NGOs were entirely unprepared for the patients they received, some without adequate food, water, medication, staff or blankets.

Jacobus told the court the process was rushed, as her assessment predicted that the process of downscaling would be fully established only by 2020.

“That, under normal circumstances, is a cumbersome process. We were caught by time, we still had meetings within our directorate. We voiced to Manamela that the time frame was not suitable.

“From December 2015 to the end of March 2016 [is not] a sufficient period to determine and appoint suitable NGOs to receive mental healthcare [patients]. No NGOs were ready by the end of March. We needed more time,” she said.

'We asked for blankets from private hospital to help freezing patients'

A former Gauteng department of health official said she had to get blankets from a private hospital to make sure mental health patients did not ...
News
8 months ago

‘I learned of Life Esidimeni deaths in the media’

A former senior health official from the Gauteng department of health testified that she first found out that some former Life Esidimeni patients had ...
News
8 months ago
Next Article