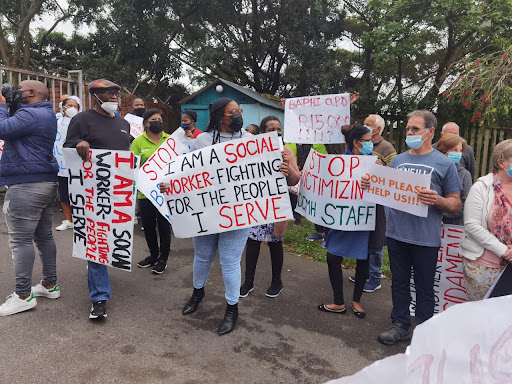 Tthe protest action was aimed at highlighting corruption and an attempt to force changes from government at provincial and national level.
Image: Supplied

The chairperson of the board of Durban and Coastal Mental Health (DCMH), Sthandiwe Mkhize, has labelled Tuesday’s staff protest against mismanagement and “corruption” as an illegal strike.

In a statement released on Wednesday, he said while the performance of the CEO, Victor Mthiyane, had been “reviewed” and a decision regarding this would be communicated in due time, he is entitled to protection under the law.

He revealed that the COO, Zola Ngidi, had been placed on suspension after allegations were made against her.

“This matter is in a court of law. The labour court has ruled that she be reinstated and the matter continues in court. We cannot comment further.

“Chasing away senior management out of their workplace is gross dereliction of duties. DCMH oversees a vulnerable community and as such the essential nature of the organisation must at all times be adhered to,” he said.

“Instigating an illegal strike with an intention to oust the CEO is not viewed as legal.”

SowetanLive sister publication, TimesLIVE reported on Tuesday that angry staff members and relatives of those who rely on the non-profit organisation, protested at its Sherwood headquarters.

They alleged that key members of management were “blatantly neglecting and abusing” people with mental disabilities, leaving them without food, nursing and with inadequate hygiene because of the non-payment of service providers.

TimesLIVE  has previously reported on allegations of a looming mental health care crisis — similar to the Life Esidimeni tragedy — in the province, with the organisation teetering on the edge of bankruptcy for the first time in its 80-year history, after the “take-over” of the board under the chairmanship of former attorney Sipho Shezi in 2019.

Mthiyane was appointed by the “Shezi” board. Shezi no longer sits on the board.

He claims he resigned, but Mkhize, who took the reins in March,  said he had been ousted and was under investigation.

The protesters said that while both the provincial departments of health and social services, which subsidise DCMH, had set up a team to investigate allegations of corruption and mismanagement and a report had been presented to them, no action had been taken.

Mkhize said staff who protested had not lodged any formal grievances. He said in the past six months there had been significant progress and the board had:

A parent representative and financial expert had been co-opted onto the board and there were now “strict vetting protocols” for service providers and employees.

Mkhize said there had been “technical delays” in the department of social development’s monthly subsidy towards staff salaries, which had been communicated to staff. It was this, he believed, that had led to the “unprotected” strike action.

Regarding the task team report, he said the board had not been given it, but it had raised key issues with the health department, including “gross underfunding”.

“Mental health compared to other diseases such as HIV/Aids, diabetes and others can no longer be swept under the carpet. It is critical to always raise the underwhelming state of funding, as sometimes challenges underpinned by insufficient funding can be misconstrued as incompetence on the side of management and staff.”

Angry staff members and relatives of those who rely on Durban and Coastal Mental Health facilities protested at the non-profit’s headquarters in ...
News
1 month ago

The Life Esidimeni inquest which seeks to establish if anyone can be held criminally liable for the deaths of 144 mental health patients came to an ...
News
2 months ago

A Gauteng senior health official who has been implicated in the Life Esidimeni tragedy has continued to distance himself from the planning and ...
News
2 months ago
Next Article