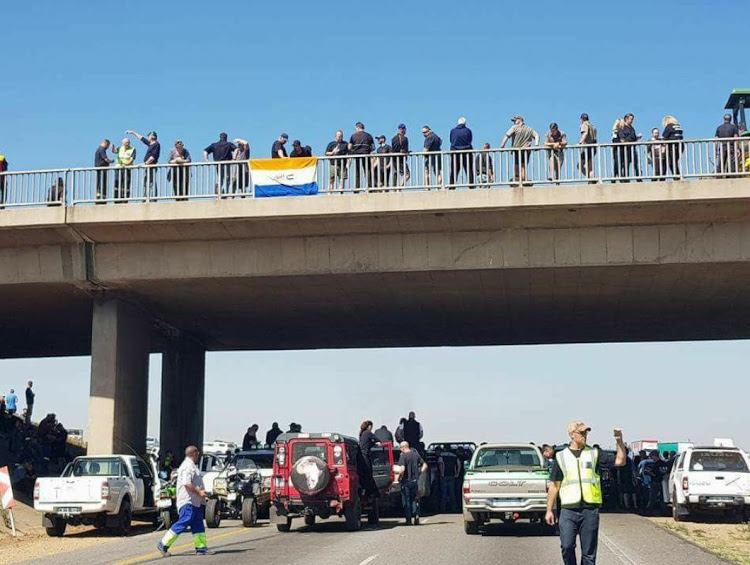 The Nelson Mandela Foundation asked for the display of the apartheid-era flag to be banned, following its use during a Black Monday protest against farm murders in 2017.
Image: Twitter/Lux_September

People who gratuitously display the apartheid-era flag yearned for a South Africa where white superiority was institutionally entrenched.

"What they say is that 'we yearn for the good old South Africa when we lived in a state which entrenched white superiority over black people, where white people were celebrated and black people were humiliated'," counsel for the SA Human Rights Commission Wim Trengove SC said on Monday.

Trengove was addressing the Equality Court, sitting at the South Gauteng High Court, in an application brought by the Nelson Mandela Foundation and the commission.

They are seeking an order declaring that gratuitous displays of the old, apartheid-era flag constituted hate speech, unfair discrimination and harassment based on race.

The application is being opposed by AfriForum, which argues that displaying the old flag amounts to constitutionally protected expression.

Trengove said people who waved the old flag chose not to wave the new flag of the democratic, nonracist South Africa.

‘Legacy of a monstrous regime’: Why the apartheid flag is hate speech

Displays of the apartheid flag are a rejection of history as it is, and express a desire for black people to be relegated to labour reserves, a ...
News
3 years ago

This month marks 25 years since we attained our freedom. It is something to be proud of. The transition from apartheid into a democratic society has ...
News
3 years ago

Trengove said those who waved the old flag did that in public, in front of black people who were degraded by the apartheid state.

"What they are saying is that they yearn for the state where black people were humiliated. It is a profoundly humiliating and degrading message they are sending to black people," Trengove said.

The foundation launched the case following the display of the old flag during a Black Monday protest organised by AfriForum in October 2017 against the murder of people on farms.

Advocate Tembeka Ngcukaitobi, for the foundation, told the court that the flag stood for racial domination.

"AfriForum does not engage with the impact of this flag," Ngcukaitobi said.

Ngcukaitobi urged the court to read section 10 of the Promotion of Equality and Prevention of Unfair Discrimination Act "in an expansive manner to include symbols in its definition".

The section states that no person may publish words that could reasonably be construed to demonstrate a clear intention to be hurtful, incite harm or propagate hatred.

Ngcukaitobi said that the Constitutional Court, in a judgement dealing with defamation, accepted that meaning was usually conveyed by words, but a picture may also convey a message, sometimes even stronger than words.