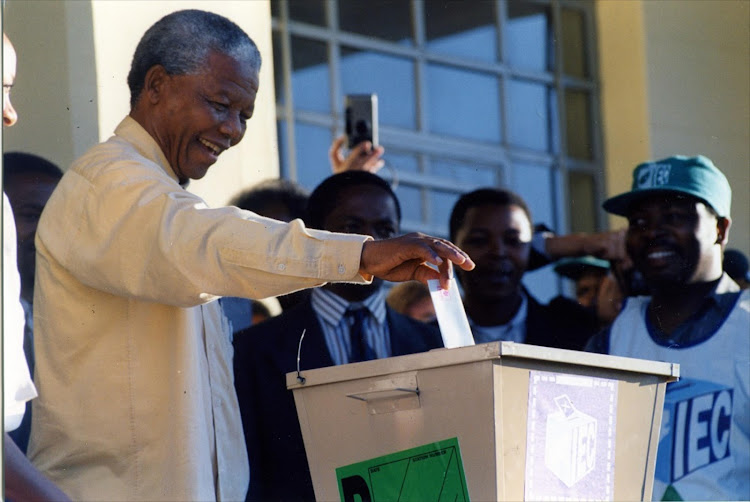 This months marks 25 years since all South Africans voted for the first time in 1994.
Image: Richard Shorey / Sunday Times

This month marks 25 years since we attained our freedom. It is something to be proud of. The transition from apartheid into a democratic society has largely been a success.

We may still have some rabid racists in their khakhi shorts irritating us with their "orange-blanje-blou" flag at some rugby matches and "cultural" rallies.

We may get power mongers who mobilise political support by exploiting our ethnic and linguistic differences. But the concept of South African nationhood is universally accepted.

We should never take this for granted, especially in a country that is racially and culturally diverse as ours. Other young nations who transitioned from colonial rule to self-determination first had to go through the trauma of civil wars and ethnic divisions before they could truly become stable nation-states.

We have every reason to celebrate.

But we should not be complacent. Nation-building is work in progress. To be guaranteed freedom demands that we constantly fight to defend it.

The progress we have made over the last 25 years can easily be rolled back if we are not vigilant and do not actively work towards building an SA far removed from the old country of apartheid.

BBC is expected to meet with the Banking Association of SA over alleged discrimination of black homeowners.
News
3 years ago

As Martin Luther King Jr reminds us: "Change does not roll in on the wheels of inevitability, but comes through continuous struggle." And so "we must straighten our backs and work for our freedom".

This means we should forever be on the lookout for threats to our freedom and democracy. No South African, maybe with the exception of those guys who disrupt book launches and threaten to burn down copies of an anti-corruption book, would deny that corruption is one such threat.

As I am writing this, the floor above me in this building is a hive of activity as deputy chief justice Raymond Zondo and his commission listen to yet another testimony on how institutions of governance - constructed to advance and defend our freedom - were hollowed out with the intention to capture the state and turn it into a tool to generate fabulous wealth for friends and associates of a now fallen president.

It is harrowing stuff.

But one question we have not explored enough in post-apartheid SA is the causal link between the scourge of corruption and an economy that remains largely closed to the majority.

Corruption in SA and on the African continent is not rampant because our people are predisposed to wayward behaviour.

I suspect that if we had a strong private sector that provides equal and fair job and business opportunities to all races without the need for state intervention, there would be little reason for people to bribe government officials for state jobs or tenders.

It was Frantz Fanon who remarked about the impotency of the "national bourgeoisie" in post-colonial societies.

Instead of fulfilling "its historic role", as played by other "national bourgeoisies" in other parts of the world, the emerging capitalist class of a post-colonial society is "quite content" with being a "business agent" of the former coloniser's capitalist class.

Whereas capitalists in other countries are responsible for new inventions and pioneer new industries and discover new ways of doing things, all of this is absent in the post-colonial societies described by Fanon.

Fanon was writing in 1961 and about the experiences of the then recently liberated former colonies. But one can draw parallels with what has happened to black participation in the South African economy since the end of apartheid.

25 years since the end of apartheid, black control of the JSE stands at only 3 percent in real terms. There aren't any major and recognisable black conglomerates we can speak of.

That is not to say we do not have black billionaires and the super-rich. It is also not to say that the black business has no desire to be innovative and to play a meaningful role in the economy.

It is to point out that the economy remains the preserve of the very people who controlled the economy under apartheid. And that those who were excluded in the past remain so today.

For too many black people interested in business, the reality is that they have to rely on government tenders - making them vulnerable to vultures in politics who would not give them opportunities unless they grease their palm.

Unless we change this arrangement, by insisting on meaningful transformation of our economy, we would have as many commissions of inquiry as we like but, 25 years from now, our children would be living in a country that is as corrupt as it is today, if not worse.