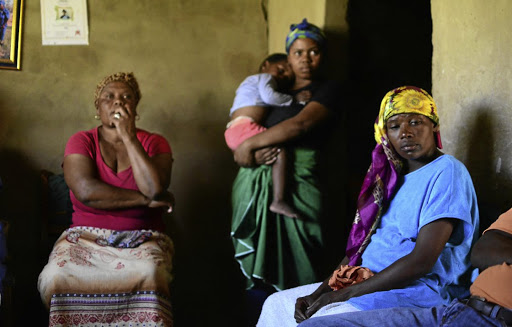 Family members mourn the death of Madan Motlhamme who was stabbed to death by another pupil at Mateane Primary School near Delareyville on Tuesday. / Tiro Ramatlhatse

A 13-year-old pupil who was killed allegedly by his classmate is the second stabbing victim at a North West primary school in three months.

Madan Motlhamme, popularly known as Paki, was stabbed in his stomach on Tuesday.

He said they were investigating to ascertain the motive behind the attack at Mateane Primary School in Diretsane, Delareyville.

Tselanyane said the suspect was reportedly trying to break up a fight among a group of boys but police were aware that there were conflicting versions of the incident.

"We don't know what precisely happened there. We are relying on witness statements and we can comment based on what they are telling us."

"I am boiling, this has made me to question the management of the school, they should have avoided this immediately after the first boy was stabbed."

Lesesa said Madan was unlucky not to survive the stabbing as the four others were.

"I am going to wait and see what government is going to do with this situation. They saw what happened, this trend cannot be allowed anymore," Lesesa said, threatening to shut down the school.

"I saw a hole in his stomach, he was not breathing. I cried, I cried a lot," she said.

Motlhamme said the school told her that after her son was stabbed they rushed him to the local clinic where he was certified dead.

"He was a quiet boy; he drank his tea for breakfast and said 'bye bye' to me. Little did I know that it was for the last time I hear his voice," she said.

North West MEC Sello Lehari also visited the school yesterday. His spokesperson Freddy Sepeng had a different version of events. He said Madan went to the toilet and another boy followed him.

"It is not clear what transpired between the two learners at the toilet as there was no eye witness."

Mhlanga said the department was working with other departments such as the SAPS to work towards safer schools and communities.

He said initiatives such as the National Junior Commissioner competition ensured that pupils take charge of their safety and refrain from endangering others. "It's the mind frame of the child we need to deal with," Mhlanga said.