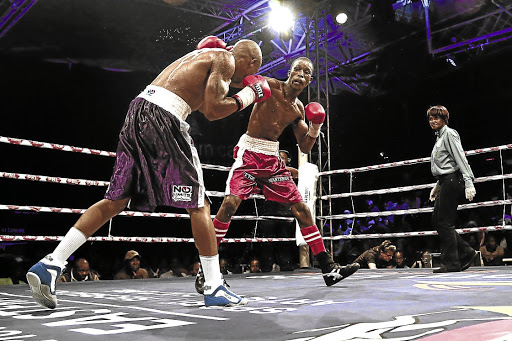 Innocent Mantengu, right, says he's been training hard, preparing for the fight that's supposed to be on Sunday. / MARK ANDREWS

Boxing in SA requires honesty from all licensees, especially promoters, for it to prosper.

That is how IBF All Africa junior featherweight champion Innocent "Tycoon" Mantengu feels.

The 28-year-old, from Mtubatuba in KwaZulu-Natal, feels hard done by the actions of promoter Thulani Magudulela, who, after approaching him for a fight meant to take place on Sunday, has since gone silent.

Mantengu sacrificed a more lucrative career in teaching back home to pursue boxing.

He was a teacher at his former school, Silethukukhanya High.

Mantengu is based in Malvern, eastern Johannesburg, where he stays with his trainer and homeboy - former professional boxer - Samson Ndlovu.

Innocent "Tycoon" Mantengu sacrificed a more lucrative career in teaching back home in Mtubatuba to pursue the more dangerous fistic career that has ...
Sport
3 years ago

The boxer's last fight was in May last year when he won the IBF Continental title against Doctor Ntsele.

"The sport of boxing is dirty," he said yesterday. "I have been training hard after being promised a fight on Sunday, but the promoter has just gone silent."

Mantengu says it is not only about them as boxers but the sacrifices they make, the bills to pay and families to support.

Traditionally married to two women with three children, Mantengu said: "Luckily I have herds of cows and goats at home. So if something requires money and I don't have it, I call my father back home and advise him to sell either a goat or a cow so that I can sort out my problems," he explained.

"It is not easy. Imagine those boxers that have nothing at all. How do they survive under empty promises?"

Promoter Magudulela fought back yesterday, saying he hadn't gone silent and had been communicating with Mantengu.

"Boxers are funny people. I told him that IBF was not happy with his opponent and also the sponsor wanted to see the fight approved. I communicated this with them today (Wednesday). But I heard that Mantengu now wants to fight for the SA title. My tournament will now take place on March 31 in KwaNongoma and I expect Mantengu to defend his title there. I've just sent him the contract for the fight," explained Magudulela.