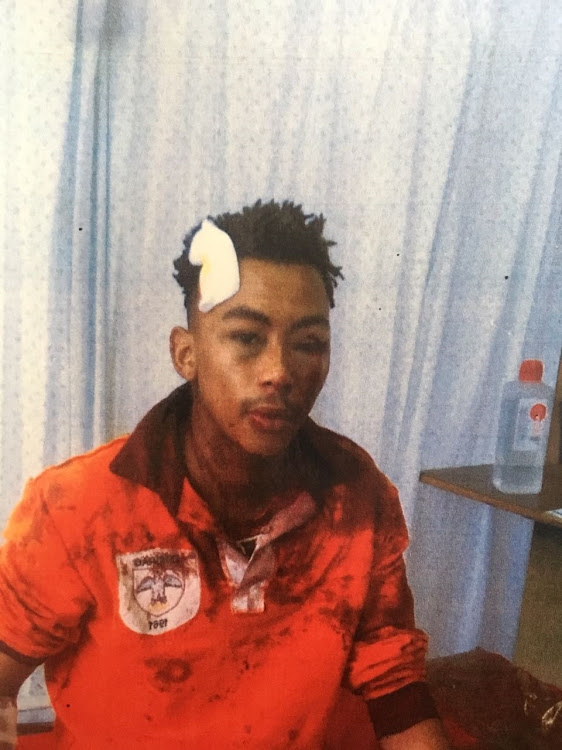 Cheslin Marsh in hospital, shortly after the attack.
Image: SUPPLIED

The "crime" they were about to punish him for was giving them the wrong ATM pin for bank cards they stole from him.

Cheslin Marsh broke down in tears in the Cape Town High Court on Thursday‚ as he did on Wednesday‚ forcing the court to adjourn.

He sat with his back to the four men he accused of attacking him and Cornelius in the early hours of Friday May 27‚ 2017‚ in Stellenbosch.

The two Stellenbosch University students were then driven to Kraaifontein where the suspects bought tik. They drove off again before eventually stopping and opened the boot of the car.

Two people then took Marsh’s cellphone from him and demanded his pin code. Video footage played in court showed Witbooi attempting to draw money at an Absa ATM at a Caltex garage in Bottelary Road.

The men drove off again and next time they stopped one of the men got out and hit the car boot‚ demanding to know why Marsh had given them the wrong pin.

They then drove off again and turned into a gravel road. There they took Marsh out to some bushes and laid his head on a rock. They told him he had given them the wrong pin code.

“I lay down on the ground and put my head on a rock. I closed my eyes and I prayed‚” Marsh said on Thursday‚ struggling to retain his composure.

“The two men were standing with a half-brick in their hands. I then lost consciousness.”

The minute he laid eyes on her‚ he thought‚ “this will be my wife“. These poignant words by Hannah Cornelius’s ex-boyfriend Fanelo Arens were spoken ...
News
4 years ago

When he woke up it was morning and he was in “horrible pain‚ everywhere pain”‚ he told the court. Bloodied‚ shocked‚ and bruised he tried to look for help in the Kraaifontein area and was chased by a dog.

He was taken to the Kraaifontein day hospital and treated for head wounds and a broken arm. After weeks in Tygerberg and Paarl hospitals he was eventually declared permanently deaf in his left ear.

Scars were still clearly visible on the back and right side of his head as he testified in court. He said the psychological trauma he suffered had forced him to drop out of university.

After his testimony‚ the court watched CCTV footage from several locations on the morning of Saturday May 27. One vantage point showed how quickly the fates of Cornelius and Marsh were sealed between the moment Cornelius pulled up in front of Marsh’s flat to drop him off to when the men attacked them.

Marsh was questioned about the footage and he identified Witbooi and Parsons as being among the attackers. Witbooi could be seen wearing Marsh’s jacket‚ which he stole from him.

Marsh was briefly cross-examined by advocate Tim Vismer‚ representing Witbooi. He claimed Witbooi did not have a knife and that Cornelius was not in the back seat of the car but in the passenger seat after they were abducted.

Vismer also claimed that Witbooi was not one of the men who threw bricks at his head. Marsh said all of this was untrue.

He was also questioned by advocate Scanlyn Collins‚ on behalf of Nashville Julius‚ who allegedly robbed him of his cellphone and cash. This was in an attempt to set the record straight about his client’s role was in the ordeal.

Marsh said although Julius’s tone was aggressive when he robbed them‚ he did not threaten him or Cornelius.

Lawyers for Parsons and Van Niekerk did not question Marsh's testimony.