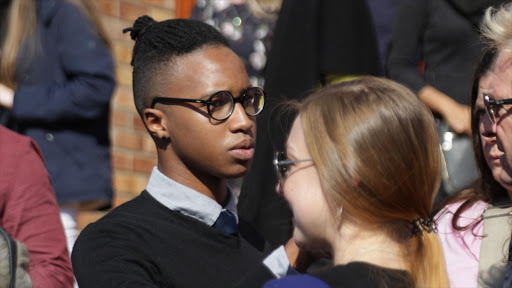 The minute he laid eyes on her‚ he thought‚ “this will be my wife“.

These poignant words by Hannah Cornelius’s ex-boyfriend Fanelo Arens were spoken at her funeral on Friday.

Cornelius (21) was raped and murdered near Stellenbosch two weeks ago after she and a friend were hijacked.

Arens delivered a moving tribute and shared some intimate details of the quirks that made up her personality.

He said that after he had first laid eyes on her in the library at school‚ he “spent the next month walking past the library” and finding any excuse to be there in the hope of seeing her again.

When he finally saw her and started talking to her‚ it turned out that she had been doing the same thing.

After they started dating‚ she would ask him quirky questions and once‚ in front of their friends‚ she asked him‚ “When men use urinals‚ don’t they get embarrassed?“

Arens’s speech showed the light side of her youthful life – how she would put on his “flip flops and his jacket” as soon as she was in his room‚ how she loved what she called her “Voortrekker leather shoes“‚ and how she was very unmaterialistic and would ask Arens to put on just a T-shirt and pyjama pants if they were relaxing at home‚ rather than wearing something smart.

He told those gathered‚ “she is who she became” because of her connection with her friends.

Her funeral service was held at the NG Kerk in Fish Hoek on Friday.