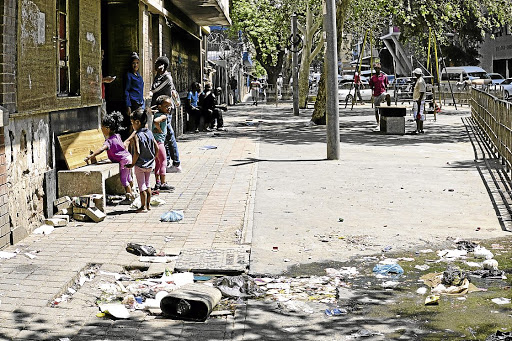 A suspected property hijacker and 13 undocumented immigrants were arrested in Marshalltown on Friday after the City of Johannesburg conducted a crime prevention operation at five hijacked and bad properties in the inner city.

The city would also be engaging with the Department of Home Affairs on ensuring that those detained were properly processed.

Mashaba said that 24 hijacked properties had been handed back to their rightful owners. About 300 buildings had been confirmed as hijacked in the city.

The city had conducted an audit of some 500 bad buildings. Twenty-four of which belonged to the city. Sixteen property hijackers had been arrested to date. Mashaba said criminals must know that they might run‚ but that “there is no place for them to hide in Johannesburg”.

“The city will not leave any stone unturned when dealing with criminal activities within its area of jurisdiction‚ and we will continue to intensify the raids at these bad and hijacked properties with the assistance of SAPS and other law enforcement agencies. “It is essential that we bring back the rule of law in our city and take it back from criminal elements such as landlords who take advantage of desperate people and house them under deplorable conditions.

“We are committed to ensuring that we stop the rot in our inner city and make it a prosperous and inclusive place for our people to live‚ work and play."

Former mayor of Johannesburg Parks Tau says the man who took his job‚ Herman Mashaba‚ has failed in his responsibility of leading the country’s ...
News
4 years ago

Johannesburg property owners are still expected to pay their old property rates while the city sorts out their issues.
News
4 years ago

The city of Johannesburg still has to settle billions of rands in debt which it inherited from the previous administration in 2016.
News
4 years ago
Next Article