Sssnakes alive – the heat is on 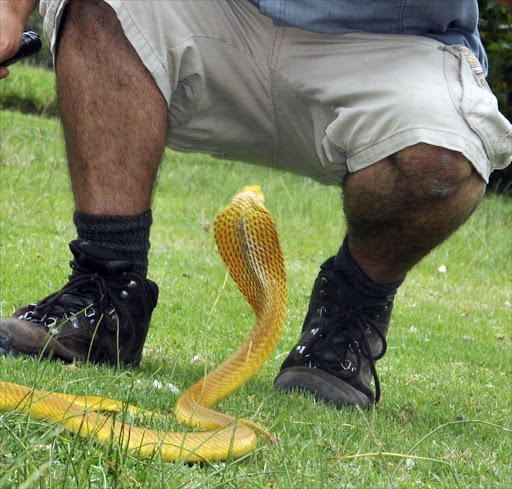 Snake experts are expecting a busy summer as several venomous reptiles have already been caught across Nelson Mandela Bay.

Mark Marshall‚ owner of Sandula Conservation and a snake expert‚ has caught six snakes on different properties in the past two weeks.

In one of the most recent incidents‚ a two-year-old Staffordshire terrier died after being bitten by a puff adder during a fight in the garden of a Kunene Park home last Wednesday afternoon.

Marshall‚ who was called to the scene to catch the 1.2m puff adder‚ said the dog was rushed to Lorraine Veterinary Clinic in Circular Drive after being bitten.

He was called when neighbours ran over to the Blyth Street house after hearing the dogs barking wildly.

“They thought someone was breaking into the house but looking into the garden they saw the dog fighting with the snake and alerted the owners who called me.”

“Within an hour of his arrival the dog began swelling and we tried everything to save him.”

Flanegan said if any animal is bitten the best method is to restrict their movement. “This is the start of a busy season. Every summer we receive many animals with snake bites‚” she said.

In March‚ a labrador-cross-alsation and a pit bull survived puff adder bites in separate incidents in the Bay.

On Sunday‚ Marshall said snakes had been more active due to the heavy rains about two weeks ago.

“This is the start of a busy summer season for all of us. Snakes are going to become far more active as the weather heats up‚” he said.

“Usually the snakes come out around the end of September and so this is basically a month early.

“The reason could be the heavy rains which flood the valleys and force the snakes to relocate to higher ground and which also increase rodent activity.”

Marshall said frog-eating snakes such as rinkhals‚ red-lipped heralds and night adders were coming out due to the increase in frogs from the rains.

Marshall explained that as the weather heats up‚ snakes also generally become more active‚ moving around in search of food‚ and with the start of breeding season‚ venturing into residential areas.

“Suburbs mostly affected are those bordering dense bush and grassy areas‚ particularly near the Baakens Valley such as Mill Park‚ Linkside‚ Walmer and Sherwood.

“Summerstrand‚ Mount Pleasant and Sardinia Bay will also probably see an increase due to the dense surrounding bush on the outskirts of the suburbs.”