ANA: Mbalula ‘abdicated on its duty’ on rugby transformation 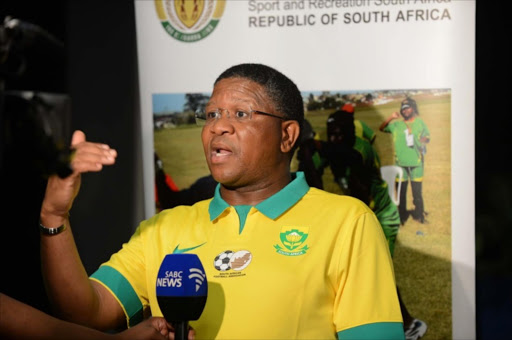 The Springboks’ assault on the 2015 Rugby World Cup — already bedevilled by a series of disruptions on and off the field — faces a legal hurdle just when the final squad of 31 goes into camp this week.

Injuries to key players‚ underwhelming results and accusations of racial bias by head coach Heyneke Meyer in his selections have already played their part in the Boks enduring a wretched build-up to the tournament‚ which will be held in England from September 18 to October 31.

But a new spanner has been thrown in the works by a scarcely known political party called the Agency for New Agenda (ANA)‚ who have taken the unprecedented step of applying for an urgent interdict preventing the Springboks from participating at the World Cup.

The application‚ which lists Sports Minister Fikile Mbalula and the South African Rugby Union (Saru) as the first and second respondents respectively‚ was lodged on August 28 and will be heard on Wednesday by Justice NM Mavundla at the Pretoria High Court‚ according to the party’s press statement.

It demands — among other things — that the Boks’ passports be confiscated and that the team be barred from exiting the country via all ports leaving it. The ANA also wrote World Rugby‚ the game’s governing body‚ requesting that it “suspend the membership of South Africa until such time that this country has a representative national team”.

Party president Tshidiso Mokhoanatse explained the party’s stance by saying the selection of the Bok team was a violation of the nation’s constitution.

“The selections are made on the basis of racially biased and exclusionary methods to exclude the majority in preference of the minority‚” he said. “Eighty% of this country is black but when you do the maths it does not add up in the national (rugby) team‚ we can’t condone this anymore.”

Mokhoanatse said Mbalula had been listed as first respondent as his ministry had “abdicated on its duty”‚ with Saru pencilled in as second respondent “as an umbrella body responsible for‚ among other things‚ transforming rugby”.

Mickey Modisane‚ Mbalula’s spokesman‚ said the minister and his department would oppose the application. “We’ll stand alongside Saru to ensure that the national rugby team travels to the World Cup‚” said Modisane.

The ANA’s bid to block the Boks going to the World Cup is one of a raft of recent political attempts at intervening in South African rugby’s age old debate — transformation or the lack thereof.

It was a move which‚ if nothing else‚ exposed the general unhappiness with the pace of transformation and ended up with Meyer naming eight players of colour in his squad of 31 — marginally less than his mandated 30%.

The ANA is a group made up of ex-Umkhonto we Sizwe combatants who resigned their membership of the African Naniotal Congress and formed a party initially named South Africa First in 2013 and changed to its current name this year.

Asked if he was not concerned that their actions would be construed as a stunt to gain publicity for a party few had heard of‚ Mokhoanatse said: “If racism is allowed in this country then I don’t have an argument. If we believe racism is prohibited and banned then they’ve got no leg to stand on.

“I need someone to tell me when exactly rugby will transform‚ 10 years‚ 20 years? They’ve had 21 years to do it so they can’t say they didn’t have time.”

World Rugby did not respond to an email asking what their response had been to ANA’s correspondence‚ and what repercussions there would be for Saru’s membership if the application for an interdict was granted.