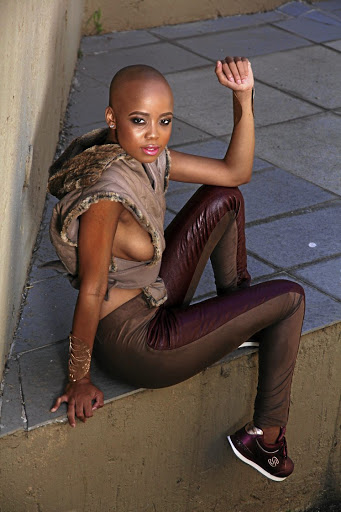 Duma Ntando has been busy during her time away from TV, but she is now back on familiar ground. / Lee Photography

No, you are not in the middle of a war zone, the DJ simply dropped a gqom track.

We are undeniably a gqom nation and vivacious vixen Ntando Duma is paying homage to that organised chaos in her new eight-episode music show on MTV Base.

The 22-year-old former Craz-e presenter whose last TV stint was on e.tv soapie Rhythm City - which she left early last year - insists that her new TV gig should not be seen as her TV comeback.

"I never left. I first gained popularity in the industry on Craz-e, so I went back to basics with this show," she says.

"I came out of my shell more with this one, because doing a children's show I was not allowed to do and say certain things.

"On the show we not only focus on the forefront of gqom. We take you back to where it originated before Distruction Boyz emerged.

The saucy video for the catchy song features lingerie-clad Duma and Wodumo breaking out in sexy dance moves while having an all-girl slumber party.

"I'm not venturing into music. It was not part of my plans. It was just a one-time thing.

"I had come up with this thing on social media, alongside my sister, where I'd dance on my bed chanting 'jiva phez kombhede'," she says.

"So, Babes saw it and said 'let's do a song together' and I wanted to make extra money on the side with December bookings."

Her show Black Twitter Unleashed broadcasts between 12pm and 1pm weekdays. She reveals that she will soon be moving to prime time.

"I'm going to reveal everything soon," she says.

"It has always been part of my plans to do radio, but it came earlier than I expected in my career.

"I thought I sounded terrible the first time I did it, but people seemed to like it."

A year after leavingRhythm City, which made her a household name, she says she is plotting for a role on the big screen.

"I would love to be on Isibaya next.

"I would love to shoot a big movie too.

"I was supposed to have a role in Tjovitjo [SABC1 drama], but I fell pregnant and couldn't do it anymore," she says.

Duma welcomed her daughter Sbahle seven months ago. She confirms that she is no longer together with her baby daddy and radio DJ Junior De Rocka.

She says that, at the moment, they are co-parenting.

"I love the fact that he's growing as a man and loves his daughter," she says

"He's a good father. He takes good care of Sbahle and me too.

"He's still young and sometimes he makes a lot of mistakes," she says.

"The biggest blessing for me last year was becoming a mom.

"Yes, I had to sacrifice some other things, but I'd do it again. I actually want another child already.

"She [Sbahle] is already a model. She is ambassador for a nappy brand."

Duma plans to release her own lingerie and kids' clothing line later this year.