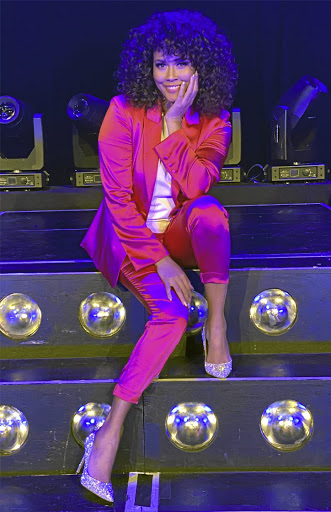 Davids, who has been singing Houston’s hits for ten years, was sublime.

Titled The Greatest Love of All: A Tribute to Whitney Houston, the show is currently on at the Joburg Theatre in Braamfontein until Sunday.

Houston fans came out in their numbers to soak deep into music of the late superstar.

It was a sold out affair with 1,060 people in attendance.

As the show started, Davids said: “I am happy to be here. It has always been my dream since I was young to sing like Whitney Houston. When I got this chance, I took it with both hands. It has been a privilege to pay tribute to the queen herself."

Born and bred in Gqeberha in Eastern Cape, Davids walked onto the stage dressed in a white outfit, sporting an Afro hairdo and took over the stage completely.

For us who have seen Davids perform the same show seven years ago, she has matured vocally and in stage presence.

With her band and backing vocalists, she started with songs like Didn't We Almost Have It All, If I Told You That, When You Believe, Where do Broken Hearts go, I’m Your Baby Tonight and It’s Not Right but It's Okay.

After an hour of fun and entertainment, Davids, who was overwhelmed by the reaction from the audience, took a break.

At some point Davids admitted that she struggled to hear her voice on the monitors because the whole theatre was singing along and dancing.

The singer returned in the second half of the show with a new outfit focusing on Houston’s most popular hits.

It was during this time that the audience began screaming, singing along and dancing more.

The tribute show was not complete until hits like I Will Always love You, I Wanna Dance With Somebody, Greatest Love of All, I’m Every Woman and Exhale (Shoop Shoop) were performed.

When she announced that the show was ending, the audience asked for more until she promised to come back next year.

If you are one of those that catch up late, you might miss this one as the show ends on Sunday.

Friday and Sunday shows are completely sold out. There are still tickets left for Saturday.

Houston's The Greatest Love of All has wowed audiences across the UK, Europe, Middle East, Asia, Australia and New Zealand, and continues to gather glowing reviews worldwide.

After her SA tour, Davids is heading to Ireland in September.