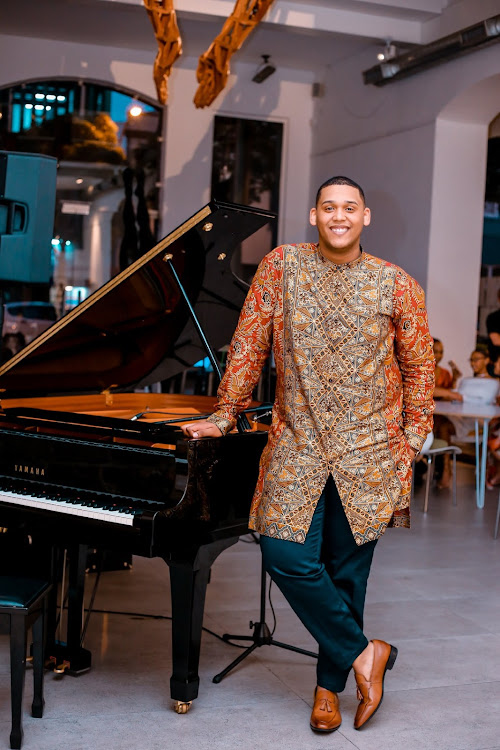 Classically trained pianist and music composer Keenan Meyer is one 25-year-old who doesn’t care about the vibes. His debut album The Alchemy of Living pays homage to SA’s musical heritage and the icons that he studied and admires like Abdullah Ibrahim. He unpacks his diverse music journey.

Can you take us through your album?

This is a passion project that represents the culmination of my schooling. It’s also an ode to my roots and claiming my story. Hopefully, in doing so I will act as an inspiration to those engaging with my art.

How long did you work on it?

Some of the music was written in 2017 and last year I started putting it together in studio. So, that process of recording, mixing and mastering took about a year. It was mixed and mastered in Los Angeles by Grammy-winning mixer and producer Qmillion. He has mixed for the likes of Robert Glasper and Christian Scott.

How would you market it?

It’s an album that is to accompany you when you feel like you need an escape. A lot of people have said it evokes nostalgia and I understand that because a lot of the context has to do with my upbringing and childhood.

Your sound is very mature. How would you describe it?

The sound, if we are looking at it from a scholarly point of view, is called African pianism. My background is in classical piano and I have a bachelor of music, honours degree in classical piano, piano methodology and music psychology. With that then comes unpacking the history of the country and my research was based on the music that was sung during #FeesMustFall and apartheid.

So, specifically protest songs and after unpacking our national archives what came to me was looking at jazz, even though it’s not what I was trained in. So yes, the sound is mature and people are surprised that it’s a 25-year-old that produced it.

How were you raised?

I grew up in a household where they were always playing good music. I then took up piano as a hobby in 2007 when I was 11 years old. My teacher wasn’t really strong in the classical sense. From there I just fell in love with being at my instrument and playing it to the point I auditioned at the National School of the Arts (NSA) in 2009. From grade 10 to matric I took all the top honours in my high school from top music to top academic and overall achiever. From there I studied at the University of Pretoria and completed my honours degree in 2018.

Take us through your research paper?

My research dealt with members of parliament such as Trevor Manuel and he gave very important information regarding the use of protest music in the Struggle. So, I presented those findings from my honours papers in 2019 at a conference at the Centre for Systematic Musicology at University of Graz in Austria. That was very special to me because it showed me that if I followed this passion and vision that’s in me, the world is my oyster. I went there as the youngest person and as the only black body in that space and spoke of the sound of my country.

When #FeesMustFall started it was my first year at University of Pretoria in 2015. I had never been to a protest before and when it happened at the university it was moving for me, especially the protest music. I didn’t know any of those songs. One of the main findings was that the Struggle songs, because of the emotional energy, made it easy for those leading the protests to foster group solidarity.

What do you do for fun?

I garden a lot.

[Laughs] What do you mean? It’s so calming. I love going out too. A cute cocktail and lunch, that’s my vibe. I don’t know what to say that classifies as fun. I find it fun to be in my house and garden.

Nompumelelo Vilakazi’s life shifted overnight from an assistant educator earning monthly wages of R3,500 to being thrown into a spotlight as Sne in ...
Entertainment
3 weeks ago

'Underdog' muso Madosini elated after being honoured with mural

The queen of Pondoland music, Madosini, and fellow Eastern Cape goddess Msaki’s cultural contribution to the industry is being honoured with a ...
Entertainment
1 month ago
Next Article