'Underdog' muso Madosini elated after being honoured with mural 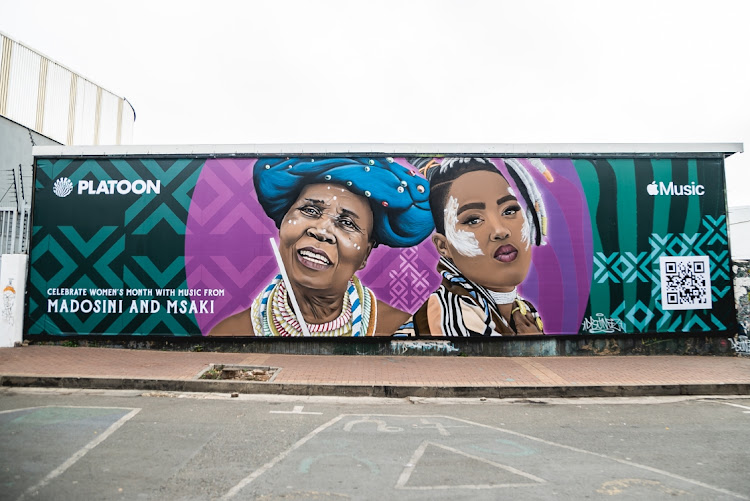 The queen of Pondoland music, Madosini, and fellow Eastern Cape goddess Msaki’s cultural contribution to the industry is being honoured with a special mural in Johannesburg’s bohemian hub, Maboneng.

The message of the mural is to display how the two musicians have unapologetically showcased their cultures and heritage through their craft in two different generations.

“It means so much to me and I'm lost for words. I'm grateful for the opportunity. The fact that people love what I created is even more wonderful,” Dbongz gushes.

“It makes me feel immortal more than anything... I've always felt like the underdog and this gesture makes my spirit feel elated,” Madosini says.

Msaki adds: “It’s an honour to be next to Madosini in this way. It’s also a treat to hear music she listens to in her own home and to co-curate a playlist with her is so special. It’s added another dimension to the already rich conversation she has so generously initiated with the youth.”

Elsewhere, Winnie Madikizela-Mandela’s legacy will be honoured tomorrow to kickoff celebrations leading to her 85th birthday next month.

The Thari — The Moral Fabric dialogue and exhibition will put the spotlight on powerful female leaders like Madikizela-Mandela under the theme Weaving the Inclusivity Tapestry.

The podcast series aims to educate young women about her story and will virtually stream on Windybrow Arts Centre’s Facebook page.

“MLF and Windyrow began their relationship as partners with a passion to elevate African stories. The Windybrow Arts Centre became a home where our children’s storybook, Granddad Mandela was launched,” says Lindo Mandela, director of MLF.

“Observing with frustration, the lag in infusing these stories in popular narrative to drive access, MLF and Windybrow have partnered with the Women’s History Museum of Zambia to present an animated podcast edition celebrating the story of Zanyiwe Winnie Madikizela-Mandela.

“This will come together in a first of a kind exhibition in the month that marks women’s contribution to the South African struggle. Just a month shy of the stalwart’s 85th birth milestone, we are thrilled to be sharing in this important work.”

Music a calling for Boohle as she finds her groove

Amapiano songbird Boohle one day found herself inside Cassper Nyovest’s mansion, unbeknown to her, and moments later they were cooking the magic of ...
Entertainment
5 months ago

Team Mosha frontman Mantshane "Khumo MRD" Malala is about to ruffle feathers in a different way – and we are not talking about music. The 35-year-old ...
Entertainment
5 months ago
Next Article