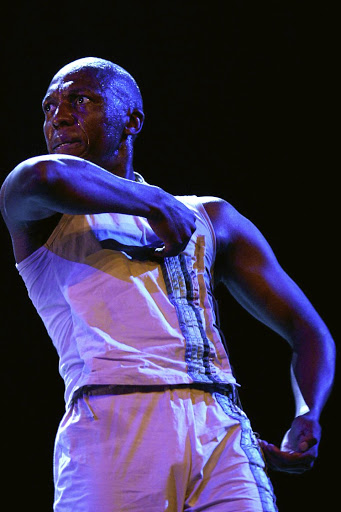 In his latest work, internationally acclaimed contemporary dancer and choreographer Vincent Mantsoe presents, through his work, how Covid-19 has brought the world into a standstill.

Mantsoe, who was born and raised in Soweto and has been living in France for 25 years, will present his work titled Cut virtually.

Cut explores the experience of living with the imminent danger of infection and the derived consequences of the ongoing pandemic, such as quarantine, social distancing and self-isolation.

The work is a collaboration between French Institute of South Africa (Ifas) and Market Theatre.

Speaking to Sowetan from his home in France, the seasoned dancer who has a reputable international profile, says the process of putting together the whole piece was challenging, but made him to appreciate the technology.

Mantsoe says normally, the process of making music for his dance pieces requires him to sit with the artists at his studio, but this one was done virtually.

"It was a long and difficult process because we had back and forth conversations with Mpho on the ideas I have for the music. I relied on virtual communication until I was happy with the music."

With many theatres still on shutdown mode, Market Theatre is bouncing back with virtual plays.
Entertainment
1 year ago

When it comes to filming the whole movement, Mantsoe had challenges because the movement of people was still restricted in France and he was further restricted in terms of utilising the space as a dancer.

"Filming was also a challenge because I am not a professional videographer.

"I was working with two cameras. Dance is about expressing yourself and use the space well. So, this time I had to be mindful of the space and my movement was restricted to the camera parameters," Mantsoe says.

"I also realised that camera does not do justice because dance does not speak to the camera, but speak to people through the physicality and gestures. "

Mantsoe says Cut was filmed in the studio of the dancer and the visual composition captures the experience of being torn between extreme poles of opposition and of struggling to resist the emotional weight of a self that may give in to the anxiety of the situation.

"Cut articulates some of the many contradictory emotions in these disturbing times. These emotions pull us apart, but also make us gravitate towards one another," he explains.

Cut opens on June 18 and runs until July 2 on social media platform for both Market Theatre and IFSA.

Mantsoe, whose dance career began with Moving into Dance in Newtown, was scheduled to tour SA in April to present his solo piece SoliiDaD, but the whole tour was cancelled due to the outbreak of the Covid-19.

He does a lot of his work with Canadian companies and Vuyani Dance company in SA. He has produced works such as KonKoriti, African Soul, Gula, Mpheyane, Barena, Ndaa and Ntu.

As a seasoned performer, Mantsoe has a string of local and international accolades that includes IGI Dance Umbrella, Standard Bank Young Artist of the Year, First Prize at Luanda and Angola Dance Encounters of Contemporary African Dance, and FNB Male Choreographer of the Year.