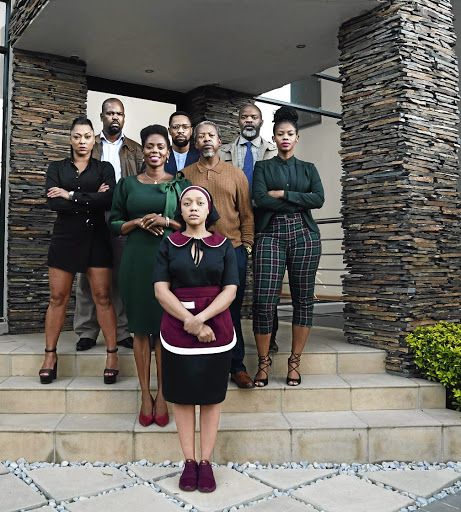 Thando Thabethe is the last woman standing after the implosive first season of Housekeepers.

The hugely successful first season of the Mzansi Magic drama was an epic bloodbath and arguably holds the record for killing off the most main characters since Game of Thrones.

Viewers were kept on the edge of their seats from episodes one when Nthati Moshesh's character unexpectedly died after being pushed down the stairs like Meryl Streep in Death Becomes Her.

In the satisfying season finale Linda (Thabethe) finally got her revenge that came at a high cost. But many viewers had one reoccurring question after so many characters were killed off - will there be a second season?

The answer is yes, but the big twist is creators have a fresh cast to support Thabethe for more riveting drama.

TV presenter Kayise Ngqula has bagged an acting gig on Mzansi Magic's 'Housekeepers' season 2.
Pic of The Day
1 year ago

"There is no township like Alex."
Entertainment
1 year ago

"Housekeepers is known to bring unexpected twists and turns - and season two doesn't disappoint in that department. Expect lots of drama, and a gripping storyline," Thabethe teases.

"Before I was handed the script I wondered what plot could possibly be written for season two after a lot of the characters from season one died.

"But our brilliant writing team took a route that viewers would not imagine, and it was quite amazing how elements from season one connect to season two."

After her housekeeper mother June (Mosimane) is framed of murder, her daughter Linda goes to great lengths to clear her name in the first season. Linda puts on an apron and starts to investigate the rich family that her mother worked for.

What we know about season two is Linda's never-ending life of crime begins to catch up with her as a feisty new detective (Maphathe) get close to the truth.

"I wouldn't say Linda has changed since we last saw her. She faces greater challenges in this season, but remains true to who she is," Thabethe explains.

"She does sometimes do questionable things, but I think she means well, even though the result may suggest otherwise."

Cooper joins the new season as Mkhonto - a woman that works for the new wealthy Ngubane family and forms a friendship with Linda.

She adds that the role is nothing compared to her Safta-winning portrayal of Tyson in the prison drama Lockdown. Ironically, Housekeepers will replace season five of Lockdown that concludes on Monday.

"Housekeepers two sees me playing a role that I was not cast for because of race or demographic, but rather on talent," Cooper points out.

"This has been an absolute highlight for me and I am so grateful. This role breaks all typecasting and allows me to play the character instead of being concerned with the red tape that usually goes with race and culture.

"It has empowered me as a performer. I love stepping into stories that have been thoroughly fleshed out and that will surprise the audience.

"I remember watching the first season thinking, I wish I thought of this idea, so to now be a part of the show is a great honour."

The veteran actor has starred in big productions such as Drum, Yizo Yizo, The Lab, Generations, Rhythm City and Of Good Report.

But Nkosi holds his role in Isidingo as a career highlight.

"As an actor, I parted with a role that allowed me growth; and a soapie that is second to none. I look back and I am grateful for the experience," Nkosi says.

"[I would describe my acting career as] not ideal, yet satisfying. Every actor appreciates it when phones ring off the hook, asking his/her availability for television, theater musicals and drama. God has it under control."

Nkosi slips into character as businessman Clive Ngubane in Housekeepers - married to the ruthless and calculative Noli (Tshabalala).

He explains that the two clash a lot when it comes to their shady business activities of cremation and crime cleaning.

"Housekeepers is one unique production. I dare say, I haven't come across a drama so rich in creative technical choices," Nkosi says about what attracted him to the show.

"Naturally the unique style is the production's selling point, over and above outstanding writing. I couldn't say no to that."

The season was initially set to premiere in April, but the national lockdown triggered by the Covid-19 pandemic forced a production break in March. Production resumed under level 4 regulations last month.

Thabethe admits that it was frustrating, but it forced them to be more creative.

Cooper agreed with Thabethe: "Set life is very different to how we used to know it, but you adjust and make it work."