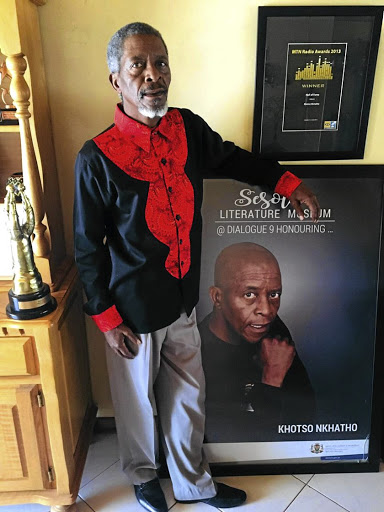 TV and film legend Khotso Nkhatho, who is famous for his roles in shows such as Mopheme, is struggling to get acting roles.

Nkhatho, who was honoured with a lifetime achievement award by the South African Film and Television Awards (Saftas) last year, after 40 years in acting, says he desperately needs to return to acting to feel whole again.

Speaking to Sowetan from his home in Ventersburg in the Free State, Nkhatho says he does not believe that getting the lifetime achievement award signalled the end of his acting career.

The 67-year-old says sometimes he feels like his soul died a long time ago and only his body is alive.

The seasoned actor last appeared on television in 2018 when he got a cameo role in Rhythm City. He has been to many auditions but is yet to crack a role since.

Nkhatho, who is also a scriptwriter and author, spent years working as a drama producer at Lesedi FM.

He admits that the television industry has changed and directors were targeting people who were popular on social media and young.

"Television stories do not want old people anymore. I'm wondering if it is my fault that I am old. If producers do not believe in casting old people, is there a world that exists without old people? That means the stories on television only cater for a certain age and exclude a certain age.

"When you go to auditions it is like going to a beauty contest," he says.

The former school teacher, whose most famous role was in Mopheme, which currently plays on SABC Encore, says watching himself acting fills him with mixed emotions and makes him melancholic.

For those who remember, it doesn't seem that long ago when actor and producer Thapelo Mokoena led a trio of parched friends across a desert to get ...
Good Life
1 year ago

"I'm sad to say that my father, Jerry Stiller, passed away from natural causes."
Entertainment
1 year ago

He remembers his youthful days and how he was full of energy.

He bemoans the death of African languages on television lately.

He says African languages are being disrespected and he watches with disgust as actors mix languages on set.

Nkhatho says he understands that a lot has changed and languages are mixed with slang but he says for television there should be a proper portrayal of African languages.

"For me, a Sotho character needs a person who can speak Sesotho fluently and do the same with other languages. When a person who does not speak the language properly is cast in a certain role it is a sign of disrespect to the language
itself and the people who speak that language," he says.

"Our languages are beautiful, especially when you add idioms. There is nothing more pleasing than watching someone speaking any of these languages so well that you develop goose bumps."

Nkhatho says his biggest regret about his acting career was not exploring stage acting when he had time to do so.

He says he always loved stage acting, having started in sketches.

He says even when he went to college to study teaching, he acted in stage productions.

He says while he was living in Johannesburg he frequented the Market Theatre in Newtown and watched many shows and wanted to see himself on that stage.

He never got the chance, however, because he did not have an agent.

When Nkhatho ran out of TV roles he decided to go back to his home town of Ventersburg and has opened a pub that has been his only source of income.

But since the lockdown, his pub, like others in the country, has been closed.

This has made it difficult for Nkhatho to earn a living.

The legend was also inducted into the MTN Radio Awards Hall of Fame in 2013.