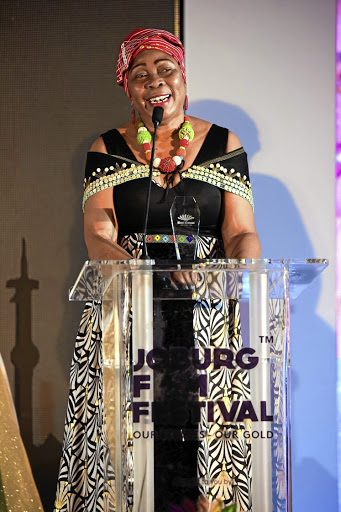 Veteran storyteller Gcina Mhlophe and filmmaker Jahmil X.T. Qubheka were among those who received recognition at the Joburg Film Festival's awards gala on Saturday night.

"I feel humbled. It was unexpected. I wear the stories of my people like an amour," Mhlophe told Sowetan.

"It's my power and the thing that gets me connected to my ancestry and everywhere I go in any part of the world, I feel like a cultural ambassador," she said.

Qubheka and Layla Swart were honoured with the inaugural Emerging Storyteller Award for their film work in productions including Knuckle City and Sew the Winter to My Skin.

The awards were hosted by The Queen actress Dineo Moeketsi at Inanda Club in Johannesburg.

The Ndlovu Youth Choir and Wouter Kellerman won the Best Independent Music Video for their Zulu version of Ed Sheeran's 'Shape of You'.
Pic of The Day
2 years ago

Barely two years after setting foot in a newsroom, the Sowetan's junior reporter Karabo Ledwaba has set about blazing the journalism trail, scooping ...
News
2 years ago

French movie Our Lady of the Nile was honoured with a Special Recognition Award from the festival's jurors.

Ten films were selected to compete at this year's festival that kicked off on Tuesday.

"Each was recognised for its powerful message and ability to provoke important debate on an array of issues."

The programme gives recognition to young emerging filmmakers across Gauteng.

Over 100 aspiring film makers aged between 18 and 25 from Ekurhuleni, Tshwane, Mogale City and Sedibeng submitted videos under the theme "Your Kasi, Your Story".

Malefetsane Masitha from Sedibeng in the Vaal was the overall winner.