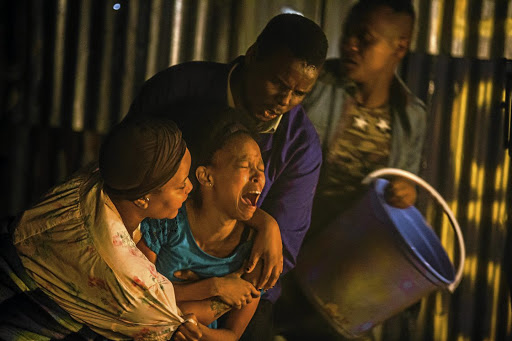 A depiction of the helpless and agonising mother who loses a child in a shack fire.
Image: Supplied

There is a ton of death on television, but the graphic demise of little Dineo (Bongi Dlamini) on Rhythm City last night was local TV's most brutal.

The show has defended the storyline that many viewers undoubtedly viewed as callous and sensationalised as demonstrating the dire effect violent crime has on South Africans on a daily basis.

For the past few weeks viewers have been kept glued to their TV screens as the feared gang led by Chicken (Nelson Ntombela) rule the e.tv show.

Chicken lured a young and naïve Dumi (Siyabonga Mtshali) into the life of crime to the horror of his guardian and sister Mapula (Mapula Mafole).

Last night, Dumi finally decided to break loose of the gang's hold on him, with devastating consequences.

Chicken and his thugs set the family's shack alight with nine-year-old sister Dineo sleeping inside. The young girl died in the blaze.

"Young people are often led to think that crime is a way out of poverty, and popularity. Nothing could be further from the truth and it's reflected in the current storyline," Rhythm City's executive producer Pontsho Mdakane said.

Another Limpopo pupil has become a victim of gang-related violence.
News
2 years ago

"Once they step into that world, everybody loses and in this storyline we see Dumi's family suffer from the very violent death of young Dineo."

Mdakane saidRhythm City will continuously work on developing storylines that resonate with South Africans and are educational.

Renowned TV producer Percy Vilakazi, currently working on The River, painted a clearer light on a common formula used when it comes to violence on TV.

Vilakazi said: "I don't think it's a recent thing; violence on TV has been around for the longest time. There is of course violence that is palatable and violence that is too extreme for the viewers.

"It can be justified within a story depending on where the story is set and what the environment is like.

"For us as a show [The River], personally what we can never do as a show is a rape scene. It's also based on what certain broadcasters will accept."

Five girls from Crystal Park High School in Benoni have been suspended after a video of them attacking a 14-year-old grade 9 pupil went viral.
News
2 years ago
Next Article