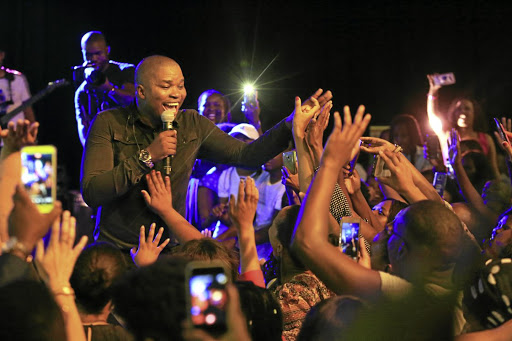 Gospel music genius Dr Tumi scored a huge performance success when he attracted 30000 people to his show at Voortrekker Monument on Saturday.

The award-winning singer -born Tumisang Makweya - filled up the venue revered as the most sacred shrine of Afrikaner heritage celebrating the Great Trek.

A no-go area for black people in the past, Voortrekker Monument on Saturday became a home to a legion of Dr Tumi's fans from all over the country.

Some fans had to stand on their feet as there were no enough seats for everybody.

"For that reason, I struggled to have enough chairs for all of you, I really did. If I was calculating how many tickets we were selling each day towards this show, there was no way I could predict that you will do what you have done.

"I want to apologise because I can't have a seat for everybody in this place. I managed to get 5000 more chairs. They are stuck at the gate, the fire marshal refuses to let them come in now because the show has begun," he said.

Dr Tumi was the only major act, performing for over three hours with his live band, which comprised his newly appointed vocalist from auditions he held last month.

Opening acts included Pastor Lungi Ndala and Zimbabwean gospel comedian Nceku Sibanda, who had the whole venue in stitches with his jokes.

Dressed in a red sweater paired with black jeans, the lanky Tumi, who is also a medical doctor, did not hold back as he dished out hits from his recent albums as he led in praise and worship.

He expressed his gratitude to his team.

"I just want to thank the entire team . my family who came all the way from Polokwane, my uncles, my brothers and sisters and my pastors.

"We went out and partnered with pastors from different churches because this is for the body of Christ.

"We come from different churches and different places just to give praise to God."