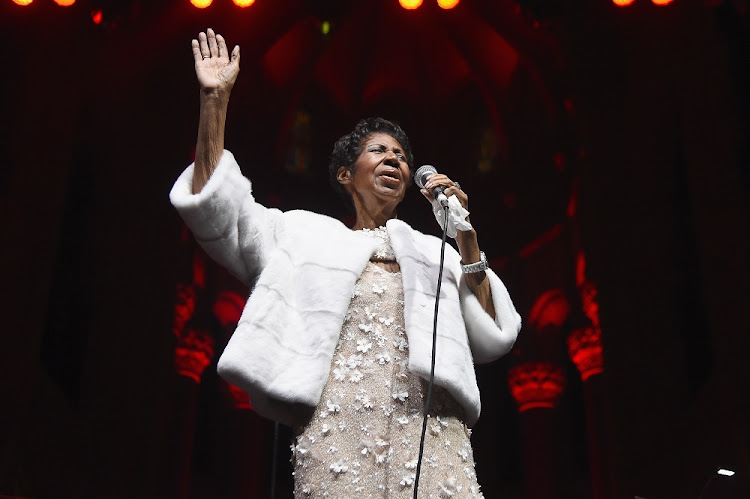 Aretha Franklin, the preacher's daughter whose powerful voice made her the long-reigning "Queen of Soul" with such hit songs as "Respect" and "Chain of Fools," died on Thursday at the age of 76, the Associated Press reported.

Franklin, who won 18 Grammys and had some 25 gold records, died at her home in Detroit, the AP said, citing a publicist for the singer. Representatives for Franklin did not immediately respond to a request for comment.

Her family had told media in her hometown of Detroit this month that she was gravely ill and asked for prayers.

Franklin’s father was a Baptist preacher in Detroit, and the gospel singing she heard in his church was her musical foundation.

She created a uniquely emotional and powerful voice that put her at the forefront of 1960s soul music along with Otis Redding, Sam Cooke and Wilson Pickett.

Franklin sang at the funeral of slain civil rights leader Martin Luther King, as well as at the presidential inaugurations of Barack Obama and Bill Clinton.

In 1987 she became the first woman voted into the Rock and Roll Hall of Fame, and in 2010 Rolling Stone magazine named her the No. 1 singer of the rock era. After recording and touring as a young gospel singer, Franklin’s career took a secular turn in 1961 when she signed with Columbia Records.

She had only modest success with Columbia, which had trouble classifying her style and tried to steer her toward pop. But when she switched to Atlantic Records in the mid-1960s, producer Jerry Wexler knew just what to do with Franklin, putting her powerful voice in a setting that combined gospel, soul and rock and made her a superstar by letting “the lady wail.”

As Franklin put it in her autobiography, she “Aretha-ized” the music.

Franklin’s heyday extended into the early 1970s as she dominated the music charts with “I Never Loved a Man (The Way I Love You),” “Baby, I Love You,” “Chain of Fools,” “Think,” “(You Make Me Feel Like) A Natural Woman,” “Do-Right Woman” and “Respect,” a cover of a Redding tune that became a song of empowerment during the civil rights era.

Franklin’s popularity would fade but she had a revival in the mid-1980s with songs such as “Freeway of Love,” a duet with George Michael named “I Knew You Were Waiting (For Me),” “Sisters Are Doin’ It for Themselves,” “Who’s Zoomin’ Who?” and a cover of the Rolling Stones’ “Jumpin’ Jack Flash.”

Along the way Franklin inspired a generation of singers.

“Pop music today is rich with glorious gospel voices and women singers in the mold cast by Aretha,” the late Wexler said in his autobiography. “... Aretha became a model for people like Chaka Khan, Natalie Cole, Donna Summer, Whitney Houston... The list of her disciples is long.”

Franklin was known to be shy, moody, imperious and difficult. She often did not get along with other women singers, including her sisters, could be quick to fire underlings and was erratic when it came to showing up for concerts and appointments.

Franklin often demanded she be paid in cash before performing and took her status as musical royalty seriously. In 2008 Beyonce introduced Tina Turner as “the queen” at the Grammy Awards ceremony, which Franklin decried as “a cheap shot” at her.

Franklin was born March 25, 1942, in Memphis, Tennessee, and raised in Detroit. Her father, the Rev. C.L. Franklin, was respected as a civil rights leader, an early advocate of “black pride” and a friend of King.

The Reverend Franklin was a charismatic figure but had also been arrested for drug possession and, under unexplained circumstances, his wife left him and their five children when Aretha was six. Four years later, Franklin’s mother died and Aretha avoided discussing her parents publicly.

Franklin started touring as part of her father’s gospel show as a teenager and got a musical education from gospel greats of the time — the Staple Singers, the Soul Stirrers, James Cleveland and The Mighty Clouds of Joy.

By 17, she had given birth to two children and later had two other sons. First married to Ted White, who became her manager and publicly abused her, Franklin later married actor Glynn Turman in 1978 but they divorced in 1984.

Franklin, who was given the Presidential Medal of Freedom in 2005, was the subject of a singing tribute at the February 2011 Grammy Awards ceremony and a Carnegie Hall tribute concert in early 2017. She did not attend either. Franklin did not perform regularly for many years, partly because of an aversion to flying after a rough trip in 1982.

Instead, she traveled in a customized bus. She often had to cancel shows for health reasons. In February 2017, she said she would keep recording but retire from touring after a limited run of concerts marking a new album that year, “A Brand New Me,” which featured her doing some of her biggest hits with the Royal Philharmonic Orchestra.

She performed “Natural Woman” at the Kennedy Center Honors in December 2015 in a tribute to songwriter Carole King, who wrote the song. Her last live performance was Nov. 7, 2017, for the Elton John AIDS Foundation gala.

“I feel very, very enriched and satisfied with respect to where my career came from and where it is now,” Franklin told a Detroit television interviewer in 2017.

“I’ll be pretty much satisfied, but I’m not going to go anywhere and just sit down and do nothing. That wouldn’t be good either.”

Singer Aretha Franklin died on Thursday August 16 2018 after falling ill over the past month. Franklin leaves a legacy of hits such as Respect and Chain of Fools.