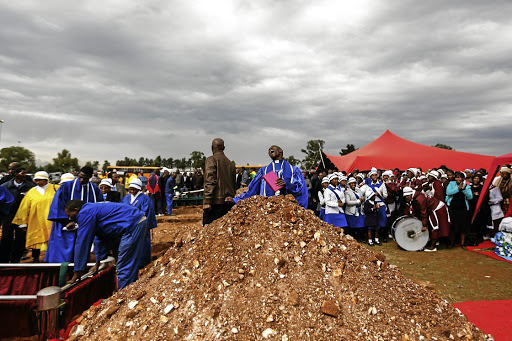 Nafupa-SA says Indian and white funeral markets are reserved for parlours owned by these race groups, and have locked out black parlours.
Image: MOELETSI MABE

Capitec has just launched a funeral policy that enables you to cover up to 21 dependants, and OUTsurance has announced that its new funeral policy will have a "pause and play" feature, which will give policyholders a grace period where they do not have to pay premiums for up to three months if they find themselves in financial trouble.

Consumers need a better understanding of the difference between funeral cover and life cover, how these products work and the benefits of cover that is underwritten, Mwandiambira says.

When a policyholder is "underwritten", it means that you subject yourself to having blood tests and answering a medical questionnaire so that your premium can be based on the risk that you pose to the insurer.

As consumers we usually prefer non-underwritten policies, because we don't want to be subjected to the hassle of blood tests and questionnaires. But you may not realise that underwritten cover is generally much cheaper than cover that is not underwritten, especially for people who are healthy.

The average South African takes out between three and four funeral policies in their lifetime, according to research by OUTsurance. Danie Matthee, the CEO of OUTsurance, says this is not ideal and that there is a high rate of cancellations of funeral policies.

On the other hand, there is also a tendency among consumers to hold numerous funeral insurance products, according to industry insiders.

Magwegwe, who is a former senior executive at Momentum and at Metropolitan, says this is because funeral insurance products are aggressively sold by the financial services industry and consumers don't understand how they work, so they are often reluctant to cancel policies when better products come on to the market.

"It's not like consumers love these products. Consumers are being bombarded. The products are sold by salespeople who are highly incentivised - they are paid more for selling funeral policies than for any other product. And because the products are not underwritten, they are fairly easy to sell. There's no inconvenience for you, the consumer."

The other driver of sales is the 'cash- back' component, usually 20% of premiums if you don't claim in the first five years. This is a feature of many new funeral products. Consumers misunderstand this feature and start to think of the policy as a savings product.

"When a new product comes on to the market, the consumer doesn't want to cancel the existing policy for fear of 'losing out' on the cash back. What they don't realise is that they usually pay for that cash-back benefit, by paying an inflated premium in the first place."

Mwandiambira says consumers don't have sufficient understanding of how funeral insurance works. "It doesn't help that industry players aren't fixing this. The product is the biggest contributor to the profits of the companies selling them," he says.

Magwegwe says that if you insured your car with Insurer A and a better product was launched by Insurer B, you wouldn't dream of insuring your car with two insurers, yet when it comes to funeral cover, that's what consumers do. Consumers do this because there is no limit to the number of funeral policies that a person can have.

However, if you are over-insured, you could be wasting your money.

Mwandiambira and Magwegwe stress that it is much cheaper to buy life cover than to try to use funeral cover as a substitute for life cover.

You may think you're doing a smart thing by having numerous funeral policies, in the hopes of leaving your family with a large sum of money to use for a funeral or any other purpose when you die. But this is a dangerous assumption to make and claims against multiple policies may be rejected due to your being "over-insured".

While there is no limit to the number of funeral policies you can have, and nothing in the Long-Term Insurance Act that deals with "over-insurance", there are insurers who won't insure any one person for more than a set amount and there are those that will pay only a certain number of polices on a particular person's life. This is according to Jennifer Preiss, the deputy ombudsman in the office of the Ombudsman for Long-term Insurance.

So, if you and three of your siblings take funeral insurance from Insurer X for your mother, when your mother dies the insurer may pay out on only two policies, or may pay out up to a certain amount.

The Ombudsman for Short-term Insurance (OSTI), Deanne Wood, says that while there is nothing stopping you from having as many funeral policies as you want covering the same interest (that is, the same life or lives), "over-insurance" may be prohibited in terms of your policy. You need to check the wording of your funeral policy.

The OSTI has recently dealt with two cases where the insurer rejected the claim on the basis of over-insurance. Wood says that in such cases the legal principle is as follows: if the amount secured by the various policies exceeds a full indemnity, the insured must make his choice. He may recover in full from any one of the insurers, but once the insurer has indemnified him, he can recover nothing from the others.

A few boxes to tick before signing up

Frank Magwegwe, the founder of financial education company Thrive Financial Wellness, who is also a certified financial planner, says before you buy another funeral policy, you should ask yourself the following questions:

• Do you need funeral cover? If yes, then who do you want to cover? Is it your immediate family or your extended family? Research what you have and if it does not cover all those who you want coveredto cover, then choose a product that meets your need.

• If you are employed, find out if you have group risk benefits, because the benefits usually include funeral cover not only for the employee, but also for the employee's spouse and children. Check the amount of cover.

• Do you have life cover on yourself that advances a portion of the cover soon after death, to cover funeral costs? If so, you don't need a funeral policy.

Magwegwe says high-income earners don't usually have funeral policies because they have life policies. Some life policies allow for up to 10% of the sum insured to be advanced to the beneficiary - usually a spouse or family member, within 24 hours of death to cover funeral costs.

While this is a good benefit, it does not extend to cover anyone else's funeral - only the funeral costs of the person whose life is covered by the policy. You may still want to take out funeral cover for other family members.

• Have you opted for a "cashback" benefit if you don't claim on your policy in five years? If you have, you are paying for it, Magwegwe says. "Go back to your insurer and ask them to quote for a policy that does not include a cashback benefit. You will get offered a premium that is about 20% cheaper."

• If you buy funeral cover through an adviser or sales person, ask them how they are paid for selling you the product. Magwegwe says some are paid five to 10 times the annual premium.

They may receive 50% of this amount upfront and if the product is still in force after year one, they get another 25%.

This goes to show how lucrative it is to sell these products, which should make you question the motive of the person selling the product to you, he says.