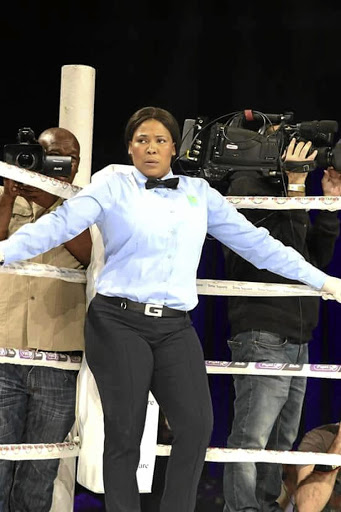 While South Africa is earnestly calling on men to desist from abusing and killing women, top boxing referee and judge Pumeza Zinakile has equally urged females to bring to an end the practice where women abuse other women.

Her plea comes at an opportune time as the country celebrates Women's Month.

Zinakile, whose hard work, dedication and passion earned her BSA's 2017 female ring official award in January, said her main message this year was towards her fellow women.

"We expect men to respect us while we, as women, have started a new bad behaviour of disrespecting, dissing and bringing each other down. Lately we have experienced ugly scenes on social media [by women].

"Early this week, a lady shared an image of a top female artist, who in this lady's mind was dressed shabbily.

"A larger number of females joined in the fracas and mocked the singer on Facebook.

BSA KOd by SABC snub in favour of English soccer

Live boxing not shown since 2017
Sport
3 years ago

"I could not help but immediately comment because I truly and strongly believe that women should come together and protect each other."

The Joburg-based ring official from Mdantsane in the Eastern Cape said she practised what she preaches, even in boxing.

"If a female colleague does something that is against the rules and regulations, either I help them or leave them alone.

"For us as women to grow, we must stop being judgmental towards each other."

Zinakile said the sport bug bit her at a young age, starting with road running.

"I was a member of the Oxford Striders in East London and it is normal for any individual growing up in our province to follow boxing.

"My uncle [ex-SA and IBO champion] Zolile Mbityi was also influential in my choices in a way. I would sometimes accompany him to the gym. I had no intentions to box... but I still developed a love for the sport.

"I then relocated to Gauteng and joined the sport in 2008 as a cadet judge under Stanley Sono and Archie Nyingwa."

Zinakile never looked back and has since handled SA and world boxing title bouts.

The single mother of two said she still makes times for her children, aged 15 and six.

"I help them with their school homework when I am around and also take them out for either dinner or lunch regularly. The little time we spend together is precious. They understand my work situation."

Solomon scores coup for boxing.
Sport
3 years ago
Next Article