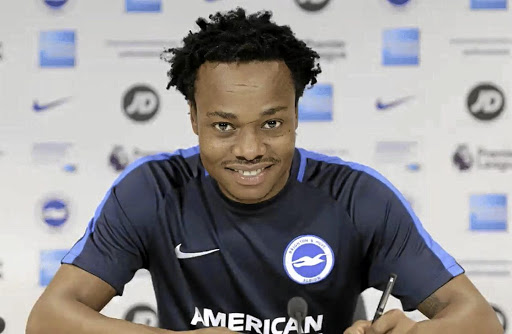 Percy Tau is happy with his Brighton deal as well as loan move to Belgian lower division.
Image: Supplied

SA international Percy Tau is in the money following his move to English Premiership side, Brighton Hove & Albion.

Popularly known as The Seagulls, Brighton are one of the smallest teams in Europe, but what even the lowest earners at the club take home would make Tau an instant millionaire.

In a UK report earlier this year, Brighton's weekly wages were revealed. It named defenders Lewis Dunk and Connor Goldson as the lowest earners at £10000 (R176000) per week, which is R704000 monthly. Goldson has since moved to Scottish side, Glasgow Rangers. Chasing Goldson, Rangers had announced a £20000 weekly wage offer.

Striker admits he always wanted to be at Chiefs.
Sport
3 years ago

He is expected to go on loan to Belgian second division club Royale Union Saint-Gilloise, which is owned by Brighton chairman Tony Bloom. This is where the 24-year-old will begin his career in Europe following his R50-million move from Mamelodi Sundowns.

The highest earner at Brighton, according to the report, is French forward Anthony Knockaert, who takes home £45000 a week or R3.2-million a month, before tax.

The only downside is the huge tax the players have to pay in England, going as high as 45%. Though Tau will be on loan, he will still be taxed from the country where his salary comes from - England.

The PSL Footballer of the Season will still make a decent living, and is thrilled about his move. "Going out on loan is always good to help a player develop and get better. It's new for me to be in Europe, and I'll get to work on myself and a few things that I need to improve," Tau said on Brighton's website.

As he embarks on a career in Europe‚ Percy Tau has thanked Mamelodi Sundowns for the role the club played in his journey as a footballer so far.
Sport
3 years ago
Next Article